Rev. Samuel Rodriguez: How One Encounter With God Changes Everything 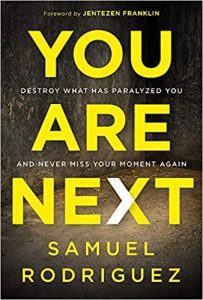 I will never forget how I first glimpsed the presence of Jesus in my life. I did not experience a dramatic healing or a voice booming down from heaven. But it shook me up and left me unsettled just the same.

If you saw me in high school, you would probably say that it did not take much to shake me up! Most people would have called me a nerd, a good student interested in learning and determined to excel, who was fairly introverted and reserved. I probably felt more excited about listening to Bon Jovi, Guns N’ Roses, and Van Halen than hearing our pastor’s sermons on Sunday.

After high school I wanted to attend college and study computers, becoming an engineer or some kind of programmer in the growing field of technology. Only in my worst nightmares would I see myself standing in a pulpit preaching before thousands of people. Never in my wildest dreams could I imagine talking to the president of the United States, let alone offering to pray at his inauguration before a worldwide audience of millions of people.

But all that changed one night at age sixteen.

Most of the day had been like any other school day. I went to classes, came home, did homework, ate dinner with my family, and then prepared to watch TV for a few minutes before bed.

Flipping channels, I clicked past familiar sitcoms with laugh tracks and soap operas with wealthy oil tycoons wooing glamorous women. Then for some strange reason, I paused when I came to a well-known televangelist preaching before a crowd of people in a large auditorium. At the time, I had never really thought about him or his style of preaching much at all.

In that moment, however, as I sat before the screen of our big console color television set, I immediately received a message in my heart:

“One day, Samuel, you will preach in front of people just like that! So many people!”

I did not doubt it for a second, even though I had no idea at the time where it came from. In fact, it would have creeped me out if I had not felt the greatest sense of peace about it.

After the sermon ended, I sat there dazed and began flipping channels again. Had I imagined that message I heard inside my head? Maybe I just needed to go to bed already.

I paused on the public television channel, airing a special on the life of Dr. Martin Luther King Jr. I knew of him, of course, as the iconic leader of the civil rights movement largely responsible for overturning segregation in our country. But when this program showed a clip of Dr. King preaching, something stirred inside me once again:

“You will be doing that someday. You will preach and lead other people and tell them about God’s love. You will be up there someday!”

I knew deep down that God has just given me a glimpse of His future for me. The next day and the weeks that followed, I could not shake the feeling of something significant having occurred that night as I sat in front of the TV in our family room. No one in our family had ever been in full-time ministry. My loving Christian parents created a warm, safe home for us, but I felt confident they had no aspirations for me as any kind of pastor or minister.

But after graduation the shy computer geek began to be transformed into a passionate young preacher on fire for God and the power of the gospel to change people’s lives.

Others began to notice, and one door after another opened for me to lead and to speak—at my church, at other churches within our denomination, and at conferences and community events. These opportunities opened before me so easily, so inevitably, that I knew without a doubt God had divinely appointed them.

As more and more people and other pastors noticed me and extended invitations for me to preach, I felt as if I knew a secret. God had revealed this path to me all those years before, and now He started to unveil His big plan for my life.

This article is adapted from You Are Next: Destroy What Has Paralyzed You and Never Miss Your Moment Again (Charisma House, 2019) by Rev. Samuel Rodriguez. Rodriguez is the president of the National Hispanic Christian Leadership Conference, the world’s largest Hispanic Christian organization. He was named among the Top 100 Christian Leaders in America by Newsmax in 2018, and Time nominated him as one of the 100 most influential people in the world in 2013. Rodriguez has advised Presidents Bush, Obama, and Trump and frequently consults with members of Congress to advance immigration and criminal justice reform as well as religious freedom initiatives. He is the best-selling author of Be Light and executive producer of two films. He likewise serves as cofounder and lead pastor of TBN Salsa. Rodriguez serves as senior pastor of New Season Christian Worship Center in Sacramento, California.

Founder of $3 Billion Company, Patagonia, is Donating His Company in the Fight Against Climate Change

Founder of the retail company, Patagonia, made waves when he released a letter stating that he, his spouse, and two grown children will be giving up their ownership of the company to fight climate change. Yvon Chouinard started Patagonia, which specializes in outdoor clothing and gear, in the 70s. The letter detailing Chouinard’s decision […]

In modern times, it’s rare for a good Samaritan to step in on behalf of someone else. In this story, a Chick-fil-A employee is hailed as a hero after tackling an alleged carjacker in Florida. According to the Okaloosa County Sheriff’s Office, a woman had been taking an infant out of her car at the […]

The Inspirational Story of Frances Tiafoe: From Sleeping in a Tennis Center to Playing the U.S. Open

After beating 22-time grand slam champion Rafael Nadal to reach the U.S. Open quarterfinal last Monday, Frances Tiafoe threw his racket on the floor and covered his face in bewilderment. It felt like a seminal moment in the 24-year-old American’s career, a culmination of hard work and raw talent which has long been heralded as the potential future of […]

Stars like Sir Paul McCartney and AC/DC joined Dave Grohl and the rest of The Foo Fighters in honoring their late bandmate, drummer Taylor Hawkins, in a sold-out concert in London’s Wembley Stadium this last Saturday. It was the first time The Foo Fighters had performed for an audience since Hawkins’s death. Grohl, who was […]