“My God is Awesome!” Grandmother’s Prayer Closet the Only Thing to Survive EF4 Tornado

Natural disasters are almost guaranteed to bring out the best and the worst of people. News reports will be filled with either morbidly gleeful statistics about the damage or tales of heroes and heroines who managed to help save others. Most stories about survival and hope focus on humans or occasionally animals. One miraculous survival in Alabama, however, had to do with inanimate objects. More specifically, the tale focused on a grandmother’s prayer closet which was literally the only thing left standing after an E4 tornado reduced the rest of the house to nothing but a flat concrete slab.

Chaplain Jason Smith was working with Billy Graham’s Rapid Response Team in Lee County, Alabama, when he discovered that the prayer closet was largely unharmed.

“Listen to me please,” Smith wrote on Facebook. “I just left a family who survived the tornado in this house and the only left standing is this closet. It’s the grandmother’s prayer closet, and the whole family survived. Are you kiddin’ me!!! My God is awesome!!! Shout somebody!”

The survival of the prayer closet is miraculous, and the survival of the family is almost as extraordinary. The tornadoes that swept across the Deep South had winds of over 170 miles per hour and killed at least 23 people, including four children, marking the deadliest day of tornadoes in the United States in years. The “monster tornado” that roared through Alabama and Georgia left a path of destruction that was nearly half a mile wide and over a mile long.

“It looks like someone almost just took a giant knife and scraped the ground,” said Lee County Sheriff Jay Jones.

According to meteorologists and storm experts, an outbreak of tornadoes in early March is not unusual in the Deep South section of the infamous Tornado Alley. That said, the human cost of this outbreak is unusually and tragically high.

“All we could do is just hold on for life and pray,” said Jonathan Clardy of Beauregard, Alabama. “It’s a blessing from God that me and my young’ns are alive.”

Julie Morrison, also of Beauregard, was similarly thankful for the survival of herself, her daughter-in-law and her husband after the tornado literally picked up their home with them inside it.

“We knew we were flying because it picked the house up,” Morrison said.

All those who survived are right to be thankful and are undoubtedly mourning those who were not so fortunate. As such, perhaps the unexpected survival of the prayer closet in Alabama will give them a little hope and comfort in the knowledge that clearly someone bigger is watching out for them. 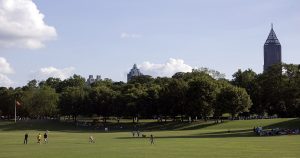