How Faith Fills the Holes a Secular World Leaves

The world is becoming increasingly secular. Some tout this as a good thing and the natural progression of the modern world. Others, however, have pointed out that a purely secular and atheistic world leaves holes that cannot be filled by anything manmade. Only faith can fill them.

Rabbi Lord Jonathan Sacks pointed out that “what the secularists forgot is that Homo sapiens is the meaning-seeking animal…[and] if there is one thing the great institutions of the modern world do not do, it is provide meaning.” Where the secular world tries to provide meaning, it often falls short or makes things worse. The decline of religion has led some people to hunt for meaning in secular areas such as politics. This in turn has led to the infection of nearly-religious zealotry found in politics today where hatred flies freely and differing political views are seen as perfectly reasonable grounds for ending a friendship or refusing to speak to a family member. Still, the secular world fails to bring about meaning.

Pew research found in a recent forum that 20 percent of Americans stated that their faith was what made their lives feel meaningful, roughly the same percentage of people who stated that their spouse gave their lives meaning and not too much lower than the number of people who emphasized their children or grandchildren. That said, a larger survey found that actively religious people were noticeably more likely to describe themselves as “very happy” when compared to unreligious people across several countries.

The research supports that faith is important, but personal observations uphold the idea as well. On a trip to Paradise, California, Russell M. Nelson, President of the Church of Jesus Christ of Latter-Day Saints, commented on both the destruction the Camp Fire had caused but also the role faith played in helping people through such devastation.

“As we tried to comfort those still reeling from the disaster, they seemed more concerned about how we were doing [after the death of our daughter Wendy to cancer.]…As we tearfully looked into each other’s hearts, the blackened chimneys and a sea of ash seemed to fade into the background. Our shared faith that God would heal our hearts and help us rebuild our lives knit our hearts together in love and allowed us to experience “the peace of God, which passeth all understanding” (Philippians 4:7). We flew home sobered by what we had seen but also inspired by the goodness of so many.”

That peace could not have been brought by secular forces. “The most profound thing I’ve witnessed [during my 35 years of traveling the world],” said Nelson, “is the unrivaled difference that belief in God and His Son, Jesus Christ, has in a person’s life. There is simply nothing to compare with the refining, ennobling strength and meaning that come into the life of a devoted believer and servant.”

As a surgeon, Nelson worked on the human heart. He was part of the team that created the heart-lung machine that enabled open heart surgery, but he recognized that humans had limits, God did not. “As a surgeon, I repaired hundreds of hearts,” Nelson said. “But my skills could not heal heartache, or erase grief, or salve emotional wounds. Nothing man-made can ever approach what God can do for His children…The most able minds cannot offer redemption from sin or heal our hearts from emotional pain. They cannot generate enduring hope or joy. They cannot promise life after death or the potential of being with our loved ones beyond the grave. They cannot generate peace of mind…If there is anything I’ve learned in my 94 years of living, it is that a life with God is far better — more filled with hope — than one without Him. Faith in God is, and has always been, the pre-eminent force for good in this world. It is the most enduring source of peace for minds and hearts.”

Believers will say the same, and the research supports that religion helps people deal with tragedy. Once the necessities are rebuilt, it may be time to focus on rebuilding faith in California rather than celebrity’s second homes. 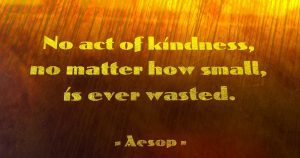 Get Your Kindness On! National Random Acts of Kindness Day is Almost Here
archives most recent
More from Beliefnet and our partners
previous posts