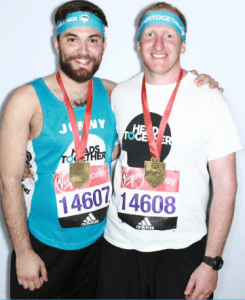 y Benjamin was elated to finish his first race alongside Neil Laybourne, his savior.

Benjamin managed to complete the marathon with the stranger who talked him down from a bridge when he was at his lowest point, feeling suicidal.

They spent the majority of the race with their arms around each other for emotional support and have now become two very close friends.

The “stranger on the bridge,” Laybourne, yelled “what an amazing experience!” as the two ran the last mile. “We did it!” he added as they crossed the finish line.

They ran to support the charity Heads Together, the mental health campaign founded by the three young Royals. The pair managed to raise over £30,000 for the charity.

Neil, who spotted the lone figure of a young man standing still on the London Waterloo Bridge amid the commuters while walking to work, stopped to talk to him, telling Jonny: “It’ll get better mate, you will get better.” After an invitation for coffee, Neil successfully talked Jonny back down to safety. After a 25 minute conversation, the emergency services stepped in and the pair went their separate ways.

Jonny, who was diagnosed with schizoaffective disorder when he was 20, has spoken frankly about his own mental health struggles, which played a part in his reason for standing on Waterloo Bridge contemplating suicide.

It was only in 2014, when Jonny launched a social media campaign to find and thank the stranger. He started the nationwide campaign in the U.K. and called it “Find Mike” – his nickname he made for Laybourn. It worked.

Eight years after the incident, the two were reunited and have kept in contact as they prepared to run the London Marathon to raise awareness and money towards mental health. They want to get people talking about the difficult subject.

As part of their powerful and important message, the two met with Prince Harry and the Duke and Duchess of Cambridge in March 2016 where they discussed mental health and efforts to prevent suicide. The royal couple then convinced the pair to run the race for Heads Together.

“It’s going to be emotional, very emotional,” Benjamin told The Telegraph about running the marathon. “But we’re all in it together and I’m excited to be a part of it – it’s a privilege.”

“I’m feeling really positive about it,” Laybourn added. “When you’ve said it, and you’ve told Heads Together you’re doing it, you can’t undo it then.”

They finished the marathon together in 5 hours and 26 minutes, coming to see crowds of people cheering them on.

Shortly before the marathon, Jonny wrote: “Admittedly, I haven’t done the training I needed for it. It’s been a tough year so far with my relapse and going back into hospital, family illness, and most recently my Uncle and then Grandma passing away a few days ago. But I WILL complete the 26 miles! Even if I have to crawl some of the way!!”

The mysterious reappearance of a Texas woman’s Bible is being hailed as a miracle. The story behind the story is truly captivating. Joyce Evans of Tyler, Texas, long wondered about her late daughter Barbara, who died in 2011, and whether she embraced the Gospel. As a Christian, Evans said she always hoped her three children […]

Actor Anthony Anderson has fulfilled a dream 30 years in the making, graduating from Howard University. The 51-year-old received a bachelor of fine arts degree from a historically black university last week. “To quote Biggie, ‘IT WAS ALL A DREAM!’ Words can’t begin to describe the emotional roller coaster I’m on right now,” Anderson wrote […]