Rabbi Joseph Gelberman, pioneer of the interfaith movement, died on September 9, 2010. He left us on Rosh Hashanah, a High Holiday considered a time of rebirth and new beginnings for people of the Jewish faith.  He
was 98 years young. 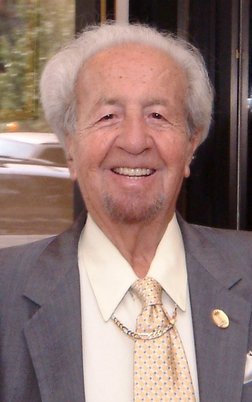 Ailing with kidney failure, he had been hospitalized, but was back in his home, surrounded by loved ones.

As founder of The New Seminary for Interfaith Studies and The New Synagogue, Rabbi Gelberman taught  interfaith concepts in New York over 40 years. His was the first seminary devoted to the training of ministers who can serve people of all faiths.  Also a devout Jew and modern Hassidic Rabbi, he had a deep love of Jewish traditions, mystical Judaism and was also a lifelong yoga practitioner.
He coined the expression, “Never instead of, always in addition to,” to explain his interfaith philosophy.

He continued teaching courses in Kabbalah and offering a monthly synagogue service up until very recently. Rosh Hashanah services this year were beautifully conducted by Rabbi Roger Ross and Rabbi Stuart Paris, although Rabbi Gelberman’s presence was missed by all.

Rabbi Ross, associate rabbi of The New Synagogue for more than a dozen years and director of The New Seminary for Interfaith Studies, sent a message to the congregation and to former students of the Rabbi last night.

“Dear ones, a great Sage and loving human being has passed,” he wrote. ” Our beloved Co-Founder Rabbi Joseph Gelberman (Chiam ben David v’ Esther) left this earth at 7:33pm 1 Tishri 5771 (9 September 2010). His passing was gentle and painless.”

“Rabbi always said the only way to live is in Joy and he would want to be remembered with that joy rather than with sadness.”

Many of Rabbi Gelberman’s students and congregants today remembered Rabbi for his great wisdom, love and awesome sense of humor – and for the mission that imparted to so many of us.

Herewith, I’d like to share an interview I did with Rabbi Gelberman in 1999, and a profile I wrote on him, for the book, What is Sprit? It tells so much about his inspiring spirit.

Rabbi Joseph Gelberman is a passionate pioneer and teacher of the interfaith approach to Spirit and worship. Raised in the Hasidic tradition and also a master of mystical Judaism, the Kabbalah, he was led by Spirit to create a forum for interfaith teachings in the 70’s called the New Seminary in New York. Upon his recent retirement at age 87, he founded the All Faiths School for Children, a program designed for interfaith couples who want to teach their children how to appreciate their heritage and to worship God through more than one religion. He also founded The All Faiths Seminary.

The Rabbi has been on a unique mission to unite people of all faiths and to do his part to end hatred, killing, destruction, and all forms of religious persecution. A spiritual leader known for his wisdom and humor, he comes to his mission through his own profound experiences with religious persecution-as a child in Hungary, and then again as a young rabbi, when his wife and young daughter were taken to Auschwitz by Nazis, never to be seen again.

Discovering Spirit was never an issue. Spirit was with him from the very start. “I come from a Hasidic background, and you live God every moment of your life, ” he says. “God is real and necessary because it is almost what you would call a hateful environment. Anti-Semitism surrounds you. As a child we’d walk miles to a Hebrew School, and my family never knew if I would come home alive; many times I would come home with blood all over face because I would pass a church and they would throw stones. So in that environment, God is very real because the only hope we had was that God would somehow interfere and keep us safe. We know God is there because I’m still alive.”

Rabbi Gelberman embraces the idea that although religions are different, the intention is always the same-getting closer to God. Hi likes to illustrate his interfaith philosophy in the following way for the many students he has trained: “Imagine a blackboard, and in the middle of the blackboard are the names of all religions, Over the religions is a big ‘G’, meaning God. When you look at it, you realize we’re all going to the same place. Let’s help each other get there.”

What is Spirit?  Spirit is choice and embracing joy, according to Rabbi Gelberman. “The Buddha said that suffering is part of life.  We all suffer, but
I don’t pay attention to that. I rejoice because it is a sign that I am still alive. If I did not feel anything, I would be dead. It came to me after the holocaust where I lost my family, my wife, my child, everything. I had a choice. Everybody has
this choice. Either you continue to mourn for the rest of your life, and you see only the dark side of life, or you say, “I cannot do anything about them anymore but I can enrich my own life. In my case I continue their life in my life. Therefore,
I add as much joy as I can, and recognize that joy is the thing God wants me to live.”

Rabbi Gelberman has been a chaplain in the United States Army and had many traditional pulpits. His last was in Princeton, where he got a visit from spirit. ” I was there for three years , and I was always a good pastor.  And
one day, I don’t know how it happened, but I heard my soul crying. And the cry was, “You’re fine, you’re doing well, but you’re really not doing anything for yourself. You’re serving the congregation, but you’re really not growing.’ The message was
to leave the traditional pulpit and go on my own.’

He came back to New York and took and apartment, where he taught classes. Then came several small  congregations, and eventually the Little Synagogue, which was opened for
the Jewish High Holy Days. It is not rare to find people many people of other faiths greeting the Sabbath with the Rabbi. All are welcome and worship is free.

Leave a tribute or share a story about Rabbi Gelberman.

NFL quarterback Derek Carr says he has found peace in Christ following a disappointing season in which he was benched as the starter for the Las Vegas Raiders. Speaking at Church LV in Las Vegas, Carr joked that he’s “had a few weeks off” to reflect on life. The Raiders finished the season 6-11 and […]

Kevin Costner recently celebrated his 68th birthday, and offered his fans some advice on getting older. On his birthday, he posted a photo of himself sitting on a porch smiling while wearing a cowboy hat with the caption, “Don’t believe what they say about getting older. Each passing year is a gift, and it gets […]

Comedian and actor Kevin Hart said God allowed him to live after his near-fatal car crash and revealed that he realized his allure to fame. On a recent episode of the “On Purpose” podcast, Hart told Jay Shetty, “I believe in God. I’m not as spiritual as some may be, but I’m very thankful for […]