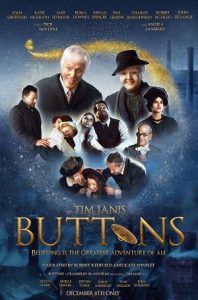 Around Christmas time, many families look forward to enjoying their favorite holiday movies. Heartwarming classics such as “A Miracle on 34th Street” and “It’s a Wonderful Life” dominate, as does “A Charlie Brown Christmas.” Comedies such as “The Santa Clause” and “Elf” are always popular options as well. A large number of people look forward to breaking out their favorite movies, but some long for something new. Others are always looking to expand their holiday film repertoire. For both groups of people, “Buttons: A New Musical Film” may be what they are looking for. The film is a “heartwarming, family-friendly feature [that] takes audiences on a journey to discover that sometimes believing can be the greatest adventure of all.”

The film features Dick Van Dyke, Roma Downey, Angela Lansbury, Paul Greene and Kate Winslet. The film is set during “a time of robber barons, mills and rising industry” when two orphans meet a pair of unexpected visitors who “turn the tide of events and change their lives forever.”

“I’m very excited to share this heartwarming film with audiences on the big screen through this special in-theater event partnership with Fathom Events,” said director Tim Janis. “This family- friendly film brings together such extraordinary talents and is a great way to kick off the Christmas season.”

Fathom Events CEO, Ray Nutt agreed. “We could not be more excited to bring this delightful holiday feature to movie theaters nationwide… ‘Buttons’ provides cinematic audiences with the joy of music, a heartwarming story and the nostalgia of old Hollywood.”

“Buttons” will show in roughly 500 movie theaters on Saturday, December 8, 2018 at 12:55 local time through Fathom’s Digital Broadcast Network. Tickets are currently on sale now, and the movie trailer can be viewed online.