Actress Renee Lawless Carries a Secret Weapon, And it Has Transformative Power 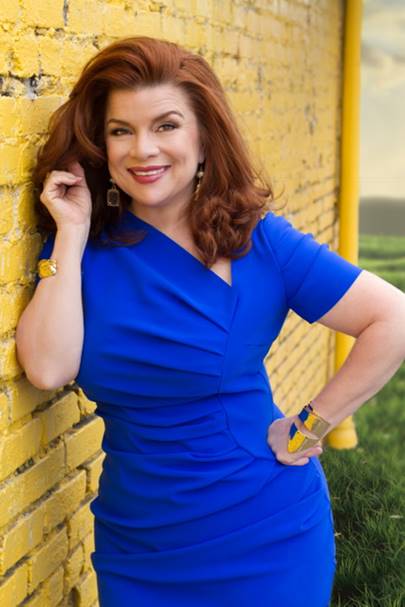 You likely know Renee Lawless as Katheryn Cryer on Tyler Perry’s hit TV drama, ‘The Haves and the Have Nots’ on the Oprah Winfrey Network (OWN). Her thick southern drawl, her wit and her undeniable strength in the face of every tough situation she faces makes it hard to not fall in love with her character quickly.

But don’t get it confused. Renee is very different than the character she plays on screen. One of things fans of the show may not know is that Lawless carries a weapon around daily. This weapon helped her land the role on the highest-rated series on OWN and protects her everywhere she goes. The name of this weapon? Jesus Christ.

Lawless is a devout Christian and holds her faith very dear to her heart.

“I went from the birthing table to the church pew,” Lawless said. “I didn’t pass go, I didn’t collect $200. I don’t know what it’s like not to be in church.”

Growing up, if the church doors were open, Lawless was probably there. The Tennessee native was raised by two godly parents in the Southern Baptist faith tradition. They both emphasized the importance of a relationship with Jesus very early.

“I walked out of that aisle with tears running down my face as a 7-year-old little girl, and I wrapped Jesus into my heart,” Lawless said.

Her faith has been a strong foundation and helped her navigate Hollywood. Everything she has and everything she’s accomplished, she credits Jesus – including landing her lead role on Tyler Perry’s ‘The Haves and the Have Nots.’

Prior to her role on the hit TV drama, Lawless was on the national tour of Wicked.

She had put in five years and realized she wanted to leave the company and return New York to start pursuing other things. Over the course of those five years, she had been receiving leads for potential projects through an actor’s database but had been ignoring them. Then she realized she would soon be without a job so she better start running through these leads. As she was scrolling through them, one really grabbed her. It was the character description for Katheryn Cryer.

“It didn’t tell me who it was or anything but I remember sitting up in bed and going ‘oh my gosh, that’s me’,” Lawless said. “Now, I don’t mean literally but I was like, I know this woman, I know everything about this woman.”

But when she opened up the file and saw that it was a Tyler Perry production, she was discouraged. She had always dreamed of working with Perry but she didn’t think he would ever choose some theater person out in the middle of nowhere who was doing a Broadway show, Lawless said. She didn’t know at the time how much Perry loved theater actors.

“I was so close to hitting delete, thinking there was no way he was going to call, so why waste my time,” Lawless said. “But then I thought what’s it going to hurt?”

Lawless sent in her headshot and her resume over. She was so nervous, she didn’t even tell anybody, not even her manager. Two weeks later she got her first call back.

When she got news from her manager about a call back on Friday evening, she was told she needed to have an audition tape in their hands by Monday morning. She had five shows that weekend, but worked between shows to get the tape over to the studio. A month and a half later, three days before Christmas, the studio called her back and wanted to fly her out to Los Angeles for a call back. After running through one scene with four other candidates, they released the other four women. Two and half weeks later, she was on set.

“I was blessed because not that many people go from the stage to being a series regular, unless they win the Tony’s so it really was divine intervention,” Lawless said. “I literally watched the hands of God working.”

If you’ve ever watched ‘The Haves and the Have Nots’ you know that Katheryn Cryer is one tough cookie. What so many fans love about her is her wit and her strength in the face of adversity. Lawless relates to her character more than she likes to admit.

“There was a scene in Season 1 and the scene was very minor. It was when [Katheryn] was going through cancer. And she’s sitting there having a conversation with Hanna in her bathroom and she goes, ‘I hate my marriage, I hate being fat. I hate being all these things,’” Lawless said. “I’m a typical woman. I’m insecure about my body. I think I’m overweight which drives me crazy often. I have been in relationships where I couldn’t stand my boyfriend or said I want to get away from that.”

“I relate to [Katheryn’s] insecurities. I also relate to her strength in the face of adversity,” Lawless said. “Often times, a lot of things she says, I wish Renee could say. I’m able to verbalize through Katheryn what I say silently as Renee.”

One of her biggest acting hurdles is that she constantly has to check herself at the door given Katheryn doesn’t have the same moral compass Renee does. She relates to Katheryn on her vulnerable side, her beyond the door side, rather than her in front of the door side.

Lawless is very passionate about her beliefs and she never allows a paycheck to compromise her values, no matter how good the offer looks.

“I have turned down several auditions after reading the script that I chose not to do albeit language or subject matter. I’ve made that decision now and I’m not Meryl Streep,” Lawless said. “The Meryl Streeps, and the Viola Davis’ and the Tom Hanks’ of the world can sit there and say I don’t like that, I don’t want to do that…I don’t wield that power. But I can wield my own heart.”

One of those roles that she turned down was an animated series from the same people who wrote the Simpsons. Though she knew she would be good at it, she was worried. She just had a feeling that she was going to book it and wasn’t sure what was going to happen on the rest of the episodes.

“I knew there was so much in the vulgar area going on in the first one, I was afraid what if you book this job and you’re locked into a contract, even though it’s just your voice,” Lawless said. “It’s not your face. But it’s still my voice and it’s still my name.”

Lawless grew up going to Billy Graham crusades and remembers George Beverly Shea singing, ‘I’d Rather Have Jesus Than Anything’. That stayed with her throughout her life.

“I have to check myself at the door because sometimes that paycheck looks really good but what profits a man if he gains the whole world and loses his own soul?,” Lawless said.

She has another secret weapon in Hollywood. It’s the power of prayer.

“You can tell me no, that ain’t gonna happen until the cows come home, but I’m going to say excuse me. The only person that can tell me no is Jesus. Don’t tell me no, because nobody thought I’d be on the ‘Haves and the Have Nots’,” Lawless said. “I’ve got my own struggle, but I can also sit there at the end of the day and go, in the Lord’s timing, it will happen.”

Lawless believes faith in entertainment is so important. She wishes there was more faith on the small screen.

“There was a time, years ago, where there were networks dedicated to kind of family values type television,” Lawless said. “The closest we had years ago was ‘Touched by an Angel’ and Michael Landon in ‘Highway to Heaven’. Both of those were extremely successful. I don’t know what happened.”

While she acknowledges that more and more mainstream actors are getting involved in faith-based films, and these films are very successful, she believes that too many people in the entertainment world are afraid to take on these projects, particularly the larger networks.

“People are writing it, but there’s not a network out there for whatever reason that wants to jump on board,” Lawless said.

This is one of the reasons she loves ‘The Haves and the Have Nots,’ The show isn’t afraid to display faith in a real way which is something the audience really connects to. Hanna prays and says Scripture and people love it, Lawless said.

As far as television goes, she believes the landscape is beginning to adjust a bit.

Katheryn’s character has transformed from season to season, but there’s one big transformation she’d love to see.

‘Let There Be Light’: The Kind of Movie America Needs Right Now
archives most recent
More from Beliefnet and our partners
previous posts