A Heartwarming Film: ‘Hearing is Believing’

“Hearing is Believing” is a heartwarming film on Rachel Flowers, a young musical prodigy who was born 15 weeks premature and lost her eyesight due to Retinopathy of Prematurity (ROP) shortly after birth. At the age of two, she began picking up melodies from her musician parents and was soon playing every song she heard by ear, including Bach fugues. Starting her musical education at the age of 4, Rachel spent 10 years studying at the Southern California Conservatory of Music and the Academy of Music for the Blind.

The film covers two years in the life of the tight-knit Flowers family, a single mom and her two kids, living paycheck to paycheck, with Rachel’s stunning music as the soundtrack. Among the great musicians appearing with Rachel in the film are Grammy winners Stevie Wonder, Dweezil Zappa, Arturo Sandoval, two-time Grammy nominated jazz pianist, Taylor Eigsti, Progressive Rock icon Keith Emerson and 50 members of the Santa Barbara Youth Symphony!

Rachel is the recipient of many awards, distinctions, and scholarships, including a Stanford University Jazz Residency, Los Angeles Music Center Spotlight Awards, winner of the Ventura County Student Jazz Competition and private instruction in advanced improvisation through the Thelonious Monk Institute of Jazz.

The film will be released in select theaters on June 16th and will be available on VOD on June 20th. 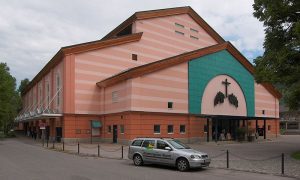