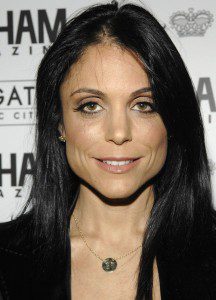 My favorite moment of television so far this week happened on one of my favorite guilty pleasures, “Bethenny Ever After.” She’s mouthy, she’s abrasive, and she’s trashy at times, but I still love her moments of vulnerability and ruthless honesty.

This week, Bethenny wrestled with religion for almost the enitre  episode with some humorous, authentic moments. Her husband Jason is Catholic and wants newborn baby Bryn to be baptized Catholic while crazy nanny wants to take Bryn to a blessing at her conservative Baptist church. Bethenny has some Jewish roots of her own, but routinely proclaims she doesn’t follow any particular faith and doesn’t particular want Bryn baptized.

Faiths collided when Bethenny allowed for the blessing to happen only at the nanny’s church only to get cold feet and flee the building with baby, but later on gave in and let Bryn be baptized by a priest who couldn’t remember Bethenny’s name.

Some faithful followers of Bethenny are angry she is denying her Jewish roots, but I just enjoyed watching her struggle with and momentarily embrace religious practice as a valid addition to her career-driven lifestyle.