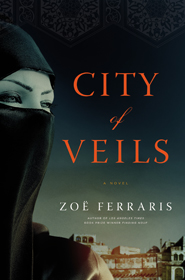 By Zoe Ferraris, author of the new novel “City of Veils”
I sometimes think Islam is all about the rules. When I lived in Saudi Arabia, I discovered that there are rules for everything. How to tuck your feet when you pray. How to dispose of old bread. How to trim your eyebrows. At times I found it comforting, other times it just got in the way.

In “City of Veils” my main character, devout Muslim detective Nayir Sharqi, faces this fact: that the bulk of a person’s religious experience lies in making decisions. It isn’t about grandiose enlightenment, it’s about whether or not he should get in an elevator with an unveiled woman, or investigate the disappearance of a disgusting American man who makes the word “infidel” seem like a compliment.
I grew up in a Christian environment where you were allowed to limit your religious thinking to once a week on Sundays from 11 to noon. Outside of that, no one said “Jesus” unless they were swearing. But for Nayir, religion is a constant influence, a living prayer. Can I look at this woman’s shoes and not commit a sin? Is it right to go to a café where men and women intermingle? When he feels overwhelmed, he turns to fatwa-online.com, where imams lay down edicts on even the most trivial things, such as whether a man should pluck his beard, and which parts are okay for plucking.
With such specificity, you can often rest assured that you’re doing the right thing – in everything. But Nayir seldom feels assured, because the rules have so circumscribed his life that he finds himself facing a contradiction: the Prophet Mohammed encouraged his followers to marry and reproduce, but in Saud Arabia, interacting with unmarried women comes with some heavy guilt and sin. So how is he supposed to meet a wife?
Nayir discovers what I’m learning myself: that Islam is not all about the rules. They’re often just window dressing, a show of religiosity. For the biggest problems, you’ll only find the answers in your heart.
Zoë Ferraris moved to Saudi Arabia in the aftermath of the first Gulf War to live with her then husband and his extended family of Saudi-Palestinian Bedouins, who had never welcomed an American into their lives before. She has an MFA from Columbia University and is the award-winning author of “Finding Nouf.” Her new novel, “City of Veils,” has just been released. She lives in San Francisco. Visit her online at www.zoeferraris.com
read next post
The Billionaires and Their Giving!
archives most recent
More from Beliefnet and our partners
previous posts