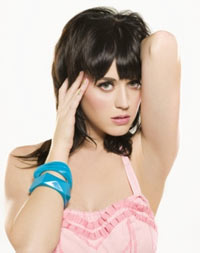 Pop phenom Katy Perry’s evangelical Christian background is infamous at this point, since it seems to contradict her conduct, choice of attire, and all around image. So I suppose it comes as no surprise that she’s the cover story of this month’s Rolling Stone, posing in nothing more than some skimpy lingerie, and for the feature photo for the article in literally only a pair of fishnet stockings. (Brief aside: it drives me crazy that Rolling Stone poses male pop stars in t-shirts and jeans or–shocker–actually playing a guitar, while they insist on showing young, female pop stars virtually naked, month after month. But I digress–sort of.)

Yet the story about Perry itself storms straight into this seeming contradiction of her charismatic preacher-father background and her risque pop star present. In “Sex, God, & Katy Perry,” Vanessa Grigoriadis writes of Perry’s parents and her upbringing:
“[T]hey’re born-again evangelical pastors and “traveling ministers,” which means they book seminars and prayer circles at any church that will have them around the country. . .They banned Katy from attending coed parties and dances, didn’t sign her up for sex education in school and forbade most pop culture, including magazines, TV and movies in the home. “It was not a ‘kumbaya’ atmosphere,” says Perry. “I knew about hell from the moment I understood a sentence. I had felt boards with Satan and people gnashing their teeth.” . . .”My mom and dad practice ‘tongues and interpretation’ together–my dad speaks in tongues and my mom interprets it,” says Perry.”
Grigoriadis also quotes Perry on where she is with God, spirituality, and her sexy self image now:
“God is very much still a part of my life,” she says. “But the way the details are told in the Bible–that’s very fuzzy for me. . .I still believe that Jesus is the son of God, but I also believe in extraterrestrials, and that there are people who are sent from God to be messengers. . .”
In the article Perry her fiance Russell Brand’s for vulgar, blasphemous remarks about Jesus and for “Lady Gaga putting a rosary in her mouth.” Interesting. Though the story does nothing in the way of helping anyone understand the contradiction in terms that Perry has become. Regardless, her songs are so ridiculously catchy and I can’t help listening to them.