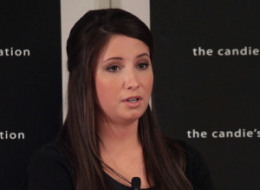 “Dancing with the Stars” is one of those shows that every time I try to break-up with it , it convinces me to give it just one more try. And Monday’s announcement of the cast forced me to do just that when it was officially confirmed that not only Jennifer “Dirty Dancing” Grey would join the show but also Bristol Palin.( I admit David Hasselhoff as a cast member was just the cherry on the sundae.)

But what I thought was sort of cute about the announcement was Bristol Palin’s prediction. No, she didn’t predict she would win, but she predicted she would be the most clothed contestant on the show. She told People magazine, “I think I will be the most dressed [contestant and have] the most modest outfits for sure because that’s who I am.”
Okay, begin hurling your best punchlines at this nineteen year old mom if you must, but I think it’s sweet that in spite of all the insults thrown at her – not to mention being dumped twice publicly- she’s worried about showing too much flesh on the dance floor, ( Yes, I also think the comment also paints a rather humorous image of the possibility of a young girl doing the tango in a turtleneck,) Palin also mentions she hopes appearing on “Dancing” will show her “work ethic.”
So while I have no problem criticizing her baby daddy Levi for his antics, I have to give Bristol a pass and believe that she is doing the best to make lemonade out of lemons. I think she could surprise people with this latest effort. And it certainly takes more sweat and humility than pretending to run for mayor in Alaska to get your own tv show or stripping for a magazine.

read next post
Forget "Heat;" How 'Bout "Love" Index?
archives most recent
More from Beliefnet and our partners
previous posts