The Sexy Mormon Vampire: A History 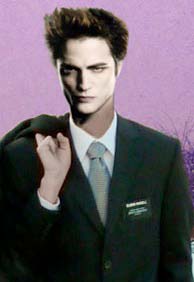 So I perked up when I saw the juicy, in depth article on this very subject, “100 Years of Sexy Sexless Mormon Vampires,” by the brilliant and eloquent Heidi Harris. (Okay: full disclosure, Heidi is one of my former grad students, but this makes her no less brilliant and eloquent.)
Of chastity and Edward, Harris writes:
“It is precisely because Edward is a vampire, then, that chastity has suddenly become so erotic. He refuses to have sex with his girlfriend, Bella, until they are properly wed, even when she practically throws herself on top of him every few chapters. Yet, he’s the one who comes to her bedroom at night, stares piercingly at her while breathing heavily, and has, to top it off, an apparently divine physique. This dissonance between the gentleman and the bad boy make Edward automatically complex, mysterious, and alluring.”
Of chastity and Edward, and Edward being a Mormon because of his chastity, Harris challenges popular assumptions and so insightfully observes:

“Of course, any theology in every religion is more complex than a simple premise like “Mormons are chaste.” But we depend on Twilight to be some sort of Summa Theologica of LDS sexual doctrine and all its minutia. That one could glean any complete understanding of Mormon theology from Twilight is, of course, completely untrue. . . .The fundamental point is that modern culture currently holds a specific assumption about what “Mormon” sexuality looks like and Edward Cullen has come to represent that assumption. The vampire’s sexuality, to simplify, is what makes him Mormon. And now all Mormons, to some extent, are seen as resembling the vampire, Edward Cullen.”
Harris’s interpretation of the popular discussion of Mormon sexuality in relation to Twilight is extensive and astute, and a must-read for anyone who is a fan of “Twilight” or simply this particular conversation in relation to the series. (So proud of Heidi for her, as always, thoroughly intelligent and nuanced contribution to this conversation–yes I am.)
read next post