Ordination Barbie: I Want One! 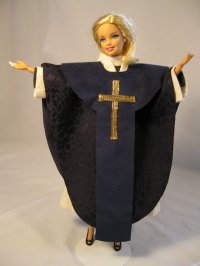 Introducing Feminist Theologian Barbie. Reverend Barbie. Pastor Barbie!
I literally cannot get over this: Barbie is getting ordained in the Episcopalian Church. I mean, I know she’s been president and entered into a whole host of other professions, but a minister Barbie? A woman minister Barbie? Now we’re talking. She even went to divinity school!

I think just about every girl of my generation has a complicated relationship with the bodacious chest and impossibly tiny waist proportions of your average Barbie doll, even as we grew up playing with an array of the tall, skinny women. My prolific friend, Tanya Less Stone even has a nonfiction history of Barbie forthcoming in October from Viking: “The Good, the Bad, and the Barbie: A Doll’s History and Her Impact on Us,” for which she discussed with countless folks their own complicated relationships with the controversial doll and its loaded role as a symbol of feminine beauty.
This aside, I’m utterly thrilled that Barbie is getting so progressive! So feminist theologian-like! To actually make a doll that is physically representing an ordained women minister feels revolutionary. Here is her description:
“The 11.5-inch-tall fictional graduate [Barbie] of Church Divinity School of the Pacific in Berkeley, Calif., has donned a cassock and surplice and is rector at St. Barbara’s-by-the-Sea in (where else?) Malibu, Calif. She arrived at the church fully accessorized, as is Barbie’s custom. Her impeccably tailored ecclesiastical vestments include various colored chasubles (the sleeveless vestments worn at Mass) for every liturgical season, black clergy shirt with white collar, neat skirt and heels, a laptop with prepared sermon and a miniature, genuine Bible. Apparently a devotee of the “smells and bells” of High Church tradition, the Rev. Barbie even has a tiny thurible, a metal vessel used for sending clouds of incense wafting toward heaven.”
You can even friend her on Facebook! I’m going to. She’s definitely a must have. She’ll be a fun teaching tool and a wonderful adornment to my office shelves!
Check out Beliefnet’s gallery of Barbie’s many careers.

After 33 successful seasons, one of college basketball's all-time coaching icons is closing the curtains on his career.