Reminiscing with the Cast of ‘Lost’ 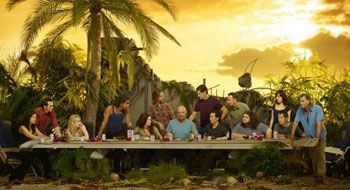 Some answers have been condensed for spatial purposes.
How do you feel about show ending?
Evangeline Lilly: As we were walking out to the stage and the montage was playing, I was whispering to my cast members, “I am going to cry like a baby when this show ends.” [It has] become so sad and [depressing] to look back, having grown up in front of all of you together. This is so intense.
Jorge Garcia: Right now it’s very appreciative and precious.
Josh Holloway: There’s a lot of camaraderie on set. The whole experience has been pretty incredible.
What was your favorite moment?
Emilie de Ravin: I think my favorite moment would be, most recently the entire cast was together just sort of hanging out like the old days. Just a special feel to it.
Daniel Dae Kim: I think for me that feeling was represented in the finale of the first season. The launching of the raft was really a special time for me. Because I thought, we all had taken this incredible journey as characters and people on the island.
Holloway: My God that is such a huge question. Really because I’ve had so many. But I agree with Emilie; I like group scenes. They take them two to three days to film because you have to cover everyone. But if you position yourself just right, you have fun most of the time. Occasionally, you have to do your little part.
Lilly: Sangria Thursdays! … I think for me the most memorable moment on the show happened in the first season. It was the episode where Claire gave birth, and Boone died. I’ll never forget walking that episode because to me it just culminated everything we were talking about on the show and everything the show represented in these two very simple, very natural and very heroic moments.
Terry O’Quinn: Just the collaboration, there’s no special moment because there were so many. What Emilie talked about: sitting under the tree, listening to Naveen Andrews [Sayid] play the guitar and everybody singing. It felt pretty sweet; I won’t forget that. But more than anything just coming to work with these people.

Michael Emerson: I have lots of fond memories of relentless confrontations in small rooms — the cabin, the hatch and Widmore’s bedroom. Those kinds of themes, so dark and scary, I love those. But the working moment that captures the whole of the suspense for me is the clandestine Sawyer standing on a cliff. [We were] looking out to the sea and trading quotes, and I had a rabbit in a backpack. It was so absurd and beautiful, majestic scenery. And I thought, we should just put down the cameras now, stand here and look.
Garcia: I’m usually running away from exploding [things], it is something that is always going to be emblazoned in my head. But it’s great sitting here, having the time going down the line and the random things that have popped into my head. Like, when the comet hit, I’m laying there and they’re throwing raw chicken parts at me. I’m not going to forget that.
What are your thoughts on what you have done so far this season?
Garcia: [Reading the script for] the premiere was definitely like, “What wait, let me read that part again, what?

Kim: We’re in the sixth season of our show and [the executive producers are] again changing the narrative style of the show. I don’t know of any other television show that has been able to give the viewers what they come to love and want to see. At the same time, keep it dynamic for as long as they have. It’s been really interesting not just this year, but every year.
Lilly: We’re not bored yet, and we’re in Season Six.