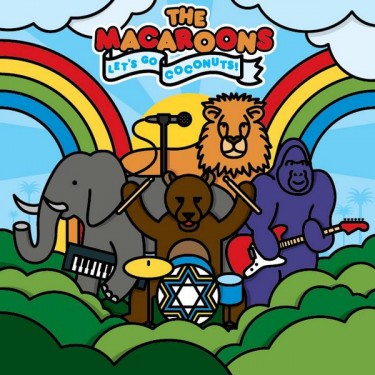 A while back, Jewish indie rock fans were thrilled to learn that Adam Gardner (of the band Guster) and Dave Schneider (from the Zambonis, who only write songs about hockey) had teamed up during a recent tour to write “Hanukkah Rocks,” an album of original, comedic Hanukkah songs as a band they called The LeeVees. You can read the entire LeeVees creation story on the JDubRecords website.
This year, the LeeVees – if you recall the history from the first paragraph, themselves a spinoff from Guster and the Zambonis – spun-off another band. The Macaroons, a kids’ band, plays songs that are slightly less sophisticated lyrically, but still sufficiently infectious in lyric and harmonies, as well as rockable.
Or, to quote the band’s Facebook fan page:

The Macaroons love big harmonies, irresistible melodies and a guitar-based sound that recalls eeverything from the Kinks to Queen to the Shins. A spin-off of the critically acclaimed band, The LeeVees, the Macaroons bring the catchy pop-rock with tunes like “Hurry Up And Light The Candle” and “Mezuzah.”

The album, “Let’s Go Coconuts,” is not officially available until spring 2010, but – presumably to try to capture the Hanukkah gift-buying spirit – the album is available on a limited basis until December 18, via the JDubRecords site, which also hosts two sample tracks from the album. I dare you to go listen to it and not sing it the rest of the day. Just try.