Here on Beliefnet, I’ve written before about Jewish themes in popular culture, including “Family Guy,” about Sarah Silverman’s bid to sell the Vatican to cure hunger, and reviewed books and films about the Holocaust (and that was all last month). But I had no idea that those themes would come together, thanks to “Family Guy Presents: Alex and Seth’s Almost-Live Comedy Show.” After an animated sketch about self-gratification, “Family Guy” creator Seth MacFarlane decides that it’s a good idea to “inject a certain amount of heart” into the program, and sings a song from “one of his favorite movies.” The song happens to be “Edelweiss,” from “The Sound of Music” – this leads co-star Alex Borstein to object, noting that the Austrian people were not very kind to her family during World War Two. After some push-pull between the two – including MacFarlane’s dismissal that “this is not the place to bring out your Hebrew baggage” – Borstein makes a last stand, declaring that her family barely escaped the Nazis, she wasn’t going to stand back and say nothing. Finally, MacFarlane caps his argument with: “If none of that ever happened, how many female Jewish comedians would you be competing with in Hollywood? Right now, it’s just you and Sarah Silverman.” Borstein waits a beat, and then joins him in song.View it for yourself here, and continue after the jump for some discussion.Let’s break it down. “Edelweiss” figures into the plot of “The Sound of Music” as a song of Austrian pride celebrating the edelweiss flower and loyalty to a country that was changing into something that some conscientious objectors (including the Von Trapp family) didn’t recognize as their homeland. So the song itself isn’t the problem. Does the messenger make a difference? If Borstein had come to that conclusion on her own, she’d be skewered by people calling her “self-hating Jew,” but since MacFarlane made the observation, people are calling him “anti-Semitic.” Either way, the Holocaust (and all its associated terms like “Austria,” “Jews,” “Nazis” and “World War Two”) seems to be off-limits.But what about the oft-invoked formula for comedy as equaling tragedy plus time? When has enough time passed to make a contextual joke? The debate reared its head with Roberto Benigni’s film “Life is Beautiful,” which was greeted by some as a Holocaust comedy. In the 90s, Saturday Night Live featured a game show called “Comedy Killers,” with categories like “cancer,” “violence against women,” and of course, “The Holocaust.” There’s always been an unofficial ban on joking about certain things – whether it’s the Holocaust, the Kennedy Assassination, space shuttle disasters or 9/11, it’s always “too soon.” (Although it seems like it’s never too soon for NY downtown fringe theater productions: witness “The Diary of Anne Frankenstein.”) Of course, there’s also context to consider. “Family Guy” has never pretended to be full of family values, and has always pushed the envelope when it comes to good taste (and overabundance of random pop culture mentions). And if the Holocaust allusion had sat solitary within this special, it might have been perceived as more starkly objectionable, but the rest of the special features “lost screen tests” for films like “Philadelphia” and “United 93”; making fun of the deaf; and an acknowledgment that not only is MacFarlane probably also going to hell, but Borstein predicts that in this lifetime, someone will probably set him on fire. I think it’s safe to say that the special could be seen as an equal opportunity offender. I shared this clip with a friend, and she objected to something totally beyond the Holocaust. “I’m just insulted by the idea that MacFarlane thinks there are only two female Jewish comedians in Hollywood.” She makes a good point.How far is too far? How soon is too soon? Are there things that should be off-limit to comedy? If we see something offensive, should we protest, or just change the channel? 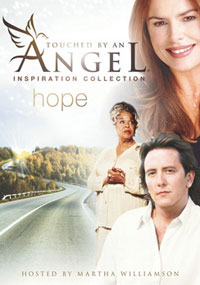 Enter to Win: 'Touched by An Angel: Inspiration Collection' DVDs
archives most recent
More from Beliefnet and our partners
previous posts