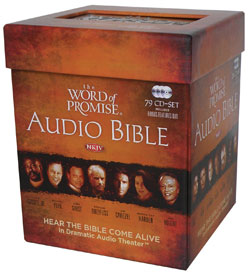 Thomas Nelson is gearing up to release an audio Bible CD set with a cool twist–the biblical characters are voiced by some of your favorite actors.
The “Word of Promise” audio Bible is voiced by such reknown film and TV stars as Jim Caviezel (Jesus), Ernie Hudson (Peter), Richard Dreyfuss (Moses), Marcia Gay Harden (Esther), Jon Voight (Abraham), Marisa Tomei (Mary Magdalene), Sean Astin (Joshua), and many others.

The set is over 90 hours long on 79 CDs and includes an interactive Bonus Features DVD that includes actor interviews, worship resources, and more.
We have one “Word of Promise” box set to give away.
Want it?
Post a comment below by October 6, 2009, answering the question: Which character in the Bible do you relate to the most? Why?
Make sure you include your email address in the designated area (it won’t be made public). The best response–based on the judgment of the Idol Chatter editors–will win a copy the CD box set.
Please read the legal stuff before entering. 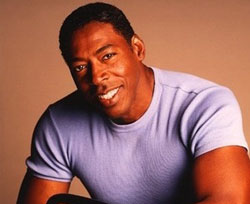