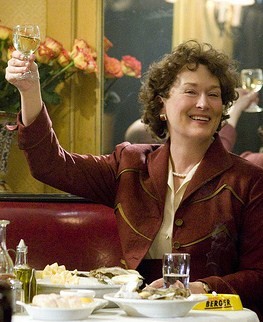 For many, the name Julia Child only conjures up caricatures of a quirky, middle-aged woman in frumpy clothes. I mean, I know I certainly have fond memories of Dan Aykroyd’s portrayal of her on “Saturday Night Live.” But Julia Child was far more than that. Before there was the Food Network or Martha Stewart, there was Julia. She brought French cuisine to the masses with humor and style while becoming one of the first women to be truly successful on a television talk show. As a pioneer foodie and feminist, she believed cooking was a sensory experience to be relished.

It is this side of Julia Child that “Julie & Julia” focuses on. “Julie & Julia” is based on a book of the same name by Julie Powell, a young woman who cooked her way through one of Julia Child’s cookbooks and wrote a blog about it. To her surprise, she then finds herself empowered by the experiment. It’s a fun premise, if not exactly a great one, that makes for enjoyable summertime move fare–though I think the movie is more of a tasty appetizer than a main course.

The strongest portions of this movie are, as one might suspect, the ones with Meryl Streep as energetic, fearless Child. One of the aspects of the movie I like best is the way that it portrays Child’s loving and supportive relationship with her husband, Paul (Stanley Tucci) as he cheers on her desire to cook and find success. This movie is truly a celebration of feminism, as well as food, in this way as well because the romantic relationships in this film recognize men and women’s equal contributions to a relationship.

But it is the Julie Powell (Amy Adams) part of the movie that works less well. Adams plays Powell, a women in a dead-end job in a post 9/11 world, as adorbable and cute and endearing. Yet somehow I found her adventure into the world of Julia Child not completely convincing–even as I realize it actually did happen in real life. Somehow, Powell’s hunger for new direction and purpose doesn’t come through as strongly as I wanted amidst the bubbly sweetness and frothiness.

Still, these are two completely worthwhile women to spend a little time with this weekend. “Julie & Julia” does not join my list of great food movies like “Big Night” or “Babette’s Feast” which truly resonate with the spiritual elements of making food, but it does provide several morsels of enjoyment and a few bits of wisdom to chew on. It is certainly better than much of the louder, bawdier, sillier movies the cineplex is serving up right now.