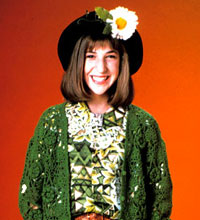 Most people remember Mayim Bialik as the precocious heroine of the show “Blossom,” itself famous for another character named “Six,” and which provided a TV home for Joey Lawrence and his signature exclamation, “Whoaaa.” Others may remember even further back, when Mayim played the exuberant kid version of Bette Midler’s character in the weepy movie “Beaches.” Since then, Mayim has gone on to earn a Ph.D in neuroscience and is the mother of two sons; now she returns to TV, as a Hasidic character on the TNT show “Saving Grace” and then in a recurring role this fall on “The Secret Life of an American Teenager.”

Mayim has a personal stake in both roles. While being on a show about teenagers, written by someone who used to write for “Blossom,” was of great interest, the Hasidic role is also a particular draw. In the years since Blossom, she has become more religiously observant, and she also has religious Jews in her family. (True story: I saw her with her baby last October at a Simchat Torah service in Los Angeles.)
Her character, she reveals, is: “supposed to be kind of a rebel who sort of left the fold and then comes back. They actually used the phrase in the script that she’s ‘baal teshuva’ which means she’s returned to observant Judaism after leaving, which actually, since I wasn’t raised religious and now I’m more observant, that term has been applied to me as well.”

As part of Mayim’s spiritual rebirth, she immersed herself in the Jewish ritual bath, the mikveh, which provides purity and figures prominently in Jewish marriage and conception rituals, and wrote about it on The Jewish Wedding Network Blog.

I miss the waters when I am without them; nursing a child often keeps us away from the ability to cycle and thus immerse, but I still need that cleansing. I miss the preparation; often the only hour I got to myself every month was my mikveh-preparation time. I miss the ritual; the always perfect temperature of the water; the fancy robe and the paper slippers; the sound of the Brooklyn-accented mikveh lady telling me proudly and defiantly that my immersion is “kosher;” I miss the mikveh.

To witness Mayim Bialik’s acting rebirth and find out when “Saving Grace” is next airing, check the TNT website.

read next post
It's National Junk Food Day: Will It Survive?
archives most recent
More from Beliefnet and our partners
previous posts