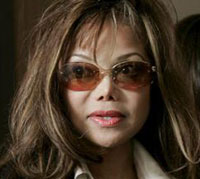 Michael Jackson’s been gone two weeks. There have been insane outpourings of sympathy and invective from fans and haters, respectively. There’s been one of what will likely be many memorials, that had locals grumbling about the cost to the state of California. But if today’s any indicator, the news on Michael Jackson continues, as sister LaToya reveals some information that she says Michael shared with her before his death.

“Michael was murdered,” LaToya claims in an exclusive interview with London newspaper the News of the World. “We don’t think just one person was involved in the murder,” she added, refusing to name the people she believes are responsible for the death during her four-hour interview in L.A. “It was a conspiracy to get Michael’s money.”

Jackson was one of the world’s most iconic performers. (I write this from Israel, where you can’t have a conversation without referring to Jackson or one of his songs…) And the news about him doesn’t stop: in the time I was writing this post about LaToya, another post announced thatit’s possible MJ’s death will be ruled a homicide, and result in a criminal trial.
Michael Jackson was far from ordinary in his life, and although the family undoubtedly wants closure and normalcy, it’s not all that surprising that the circumstances surrounding his death may also be something other than ordinary. America–and the world–will stay tuned.