As they have for hundreds of years, a Buddhist monk goes on a journey in search of the “unmistaken child” who is the reincarnation of his master. The quest is unchanged in its goal and its procedures. But this time the monk is sporting a very modern backpack, traveling in part by helicopter, and the journey is being filmed by an Israeli documentary film-maker. I spoke to that film-maker, Nati Baratz, as he was traveling through the United States to talk about the film, “Unmistaken Child.”Tell me how this project came about.Back in 93 I fell in love with Tibetans, especially the people, and I felt a moral responsibility about the suppression by the Chinese. I went home to study cinema and I wanted for a long time to make a film abut Tibet, to bring to the audience the experience of the culture and the qualities. The Tibetans have this happy nature, they are calm and non-violent and they have developed a lot of wisdom over thousands of years. Most of all, they have this endless commitment to benefit others. You can read about it but to experience it is different. The Buddhist culture is the best thing I have found in my life until today. It is not formal but I am connected to it, more Buddhist than anything else, more than my Jewish background.And how did you decide on this particular story?I wanted to make a film about a hidden Tibetan tribe. In the course of this I went to Nepal and joined the meditation to deepen my understanding of Tibetan Buddhism. There I heard this talk about the life of the master who had just died. The lama Tenzin Zopa touched me with his huge heart when he asked us all to pray for the swift and unmistaken return of his master. I knew this is the movie I have to make. Do you believe in reincarnation? Specific, individual reincarnation of the master’s spirit in one unmistaken child? Do you want the audience to believe in it?That is a tricky question. I want people to contemplate and think, not just experience the film but engage with it. I tried to challenge the viewer. You see one part of the film and the child looks holy, in another he looks like a normal child. I want to make the audience decide for themselves. That idea is connected to Buddhist teaching. They should not believe anything you say but should examine by themselves.How long did if take?It was a 5 Â½ year film-making. I moved with my wife and two year old daughter to India, just to give you an example of my commitment. It was great for her to live in the monastery and to play with the reincarnated child. It was tough on my wife but she had a great experience. We were really fortunate that they agreed to allow us to enter into the most private and hidden part of their life and tradition.How did you get their cooperation?I told him I am not a formal Buddhist but I have a strong commitment to the Tibetans amd really want to make this movie. It was a chance to show the world the qualities of the master. The Dalai Lama is famous and so many people are benefiting from it. It is not a problem to be famous, it is what you make out of it.I had to ask permission from a very senior lama. It was a three month journey that really tested my patience and insistence. I passed an astrology check. And it took Tenzin quite a while to really trust me. They are monks so they are not used to the camera, they are modest. He is an amazing example. For me, all the reincarnation is just a narrative motor to have enough suspense and interest in the film to experience Tenzin’s journey of maturity, from a servant to a leader, bringing the treasure back home to the Tibetan people.As the father of a two-year-old while you were filming, how did that affect the way you portrayed the family asked to give up their two-year-old?I tried to give an intimate and close look at the story to give people the option to experience a different way of thinking. When the parents give up the child, this is the most touching part of the film for me, because they do it for the benefit of others. It is very inspiring that people give up their most precious thing for the benefit of others. That is what makes the film a feature-like experience. It is a documentary with an amazing character on an amazing journey that is very spiritual, a transformation. 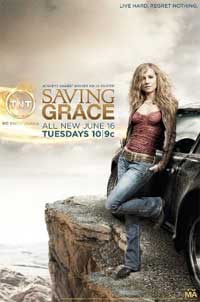 'Saving Grace': Keeps Getting Better
archives most recent
More from Beliefnet and our partners
previous posts