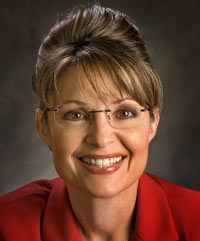 You may like her. You may not. But regardless of what the majority of politicos and pollsters are saying about her, Sarah Palin is emerging as one of the most recognizable pop culture icons of our time.
She is the focus of the healines this week on the Wall Street Journal, the New York Times, The Huffington Post, etc.

And further, she’s a person of faith who is doing what so many faith-based politicians have been unable to do: she’s stepping out from the conventional wisdom and making decisions according to her own faith and conscience,rather than being governed by the conventional wisdom or prevailing trends of the day.
How refreshing!
The blogosphere and the mainstream media have agreed that her choice to step down as the Governor of Alaska was surprising and atypical. Her speech seemed somewhat awkward and her hastily arranged press conference seemed uncanny at best and creepy at worst. But consider what she achieved:

• A typically dead news day (Friday) came alive and on the July 4th weekend as she was the talk of many a picnic and party;
• She somehow displaced Michael Jackson from media dominance;
• She achieved new status as the FBI broke policy to comment that they are NOT investigating her, as was being widely reported in mediabuzzland;
• Anticipation for her upcoming book is certainly high;
• She’s more recognizable than any governor in the country except for Ah-nold, at least among those who aren’t having affairs;

• All sorts of options lie ahead for her, including political commentator, organizational founder, evangelical spokesperson, business woman and, of course, possible senatorial or Presidential candidate.
What’s known is that Sarah Palin is mostly ostracized among liberals and criticized in the mainstream media, while being praised and adored in conservative circles. What’s forgotten is that as recently as last month she was polling close to 50% among independents, the ones who decide elections, buy books, watch TV, and the ones who may soon recognize she is, at her core, a faith-based version of one of their own.
read next post
Roger Federer and Tiger Woods's Weekend Wins
archives most recent
More from Beliefnet and our partners
previous posts