If there’s one thing that’s threatening to the Orthodox Jewish community–aside from assimilation, intermarriage, single Jews marrying later and having fewer kids, women’s singing voices, etc.–it’s the internet. The internet can provide lots of information, but there’s lots of immodest content out there– celebrity gossip, immodest fashions, access to non-Orthodox-approved Jewish and secular content, and of course, pornography.
Now comes a search engine designed to protect the members of this community from inappropriate content: Koogle.co.il.

Koogle, reports TechRadar on a story found at Reuters, will “filter out explicit sites and ‘religiously objectionable material’ including ‘immodest’ photos of women.”
The service is in Hebrew– typing in the Hebrew for “Angelina Jolie” returned an error message, as did the Hebrew for “Kochav Nolad,” which is Israel’s version of American Idol. I haven’t typed in the word pornography, but so far, the search engine seems to be working by not returning any search results for objectionable phrases. Whether it actually helps people find what they’re looking for? Probably still up for debate.

Where’s the name from? Well, there’s the obvious rhyming play with search mega-giant Google. And wherefore the “K”? Well, a “kugel” is a noodle (or sometimes potato) pudding often served by Ashkenazi Jews. But I like to think the presence of the K also indicates a hekhsher of sorts– a symbol that says, “this site is kosher.” (Even though the K mark on most products isn’t trusted by most Orthodox Jews, but that’s another story for another blog post.) 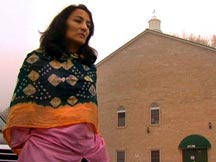