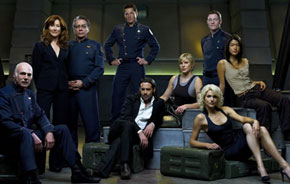 The season finale of “Battlestar Galactica” aired Friday, March 20. Please note, this review contains spoilers.
Several weeks ago I told a friend of mine, half-joking, that it was a good thing “Battlestar Galactica” was coming to an end because I didn’t see the show could survive in the Obama era. The re-imagining of the late 70s space opera first appeared in 2003 as a miniseries that drew impressively on the paranoid and melancholic post-9/11 Zeitgeist and then would go on to win a Peabody Award for its second straight-from-the-Gitmo-headlines season.

I’m not naive enough to believe that any presidency is as squeaky clean as we’d like to believe, but there does seem to be a new commitment to transparency taking hold in the nation’s capital and that does nothing to feed the delicious paranoia that fueled the best episodes of “Galactica.” But, like the “X-Files” and “Stargate” before it, “Galactica” became a victim of its own mythology, becoming bloated, unwieldy and confined, and, dare I say, uninteresting. The thrilling intensity of the first two seasons had been lost, but the final episodes were breathing life back into the series. Which is why the series finale disappointed me so.
The two-hour finale was supposed to answer all of our burning questions–What is Starbuck? Who is Daniel? What is the Cylons’ much referenced but unexplained plan?–but instead left me burning with criticism. I could go on and on, as I did immediately after the airing, but instead I will limit it to the most egregious transgression of the finale: its utter lack of realism.

“Galactica” was predicated on realism, on conflict and politicking and base motivations. Although rife with technology, these were human stories, with characters who often appealed to their respective religious concerns to explain/justify/explore their complex failures and mistakes. And yet the finale provided unsatisfying, simplistic and treacly resolutions.

Brother Cavil and his faction of Cylons waged civil war against the cylons allied with the humans, hunted and captured the human-cylon hybrid child Hera and launched a full-scale assault on the Galactica only to be stopped by Baltar speechifying about angels and hope (another Obama meme?)? Call me incredulous. Luckily, Tigh throws in the recipe to resurrection to make it a bit more believable. But when the Final Five’s download of the information goes haywire and Cavil suspects sabotage, what does the cynical, bitter, number one do? Curses and eats a bullet.
I’ll admit, it’s somewhat fitting that Baltar, the pseudo-guru of Galactica, and Cavil, the atheist dictator of the Cylons, have a bit of a theological throwdown at the end, but for Cavil to simply throw in the towel is truly out of character and completely anti-climactic compared to the action-packed hour — or the series — that preceded it.
Hour two was even less believable than the first. After Starbuck punches in coordinates based on the funny tune she and the Final Five keep hearing in their heads, the Galactica makes one final jump to Earth, our Earth. Here the entire fleet, per Lee Adama’s suggestion, decides to leave the technology of the past behind, to start fresh, to break the cycle of violence. 38,000 people all agree to give up the creature comforts of say, indoor plumbing, to start over in the Stone Age. Yeah, right. Where’s the realism in that? Where’s the conflict? Where’s the fun? (On the other hand, maybe they’ll give up the die-cut corner fetish.)
As the characters peeled away to live their lives on different continents, I couldn’t help but think I was watching the high school graduation episode of a teen drama. Chief’s going to live by himself on an island; Admiral Adama’s gonna build a cabin by a lake; the Tighs are heading overseas. Starbuck, who may or may not be an angel, a Cylon, or something in-between, simply vanishes after telling Lee that her journey is done and Lee wants to climb mountains and great adventures. (Note to Mr. Moore: a Lee-centered Neolithic adventure series, “Lee in the Land of the Lost,” would be pretty cool.)
But it didn’t end there, folks. No, we hadn’t been beaten over the head with enough optimism yet. In a trice, the viewers are transported to modern day, where, we are to believe, modern humans have descended from the members of the fleet and Stone Age man. Angel Six and Baltar are there to make it clear that although humanity has destroyed itself before, be it on Kobol or the other “Earth,” there is hope for us yet. Oh, the sentimentality! Sure, there’s always been an underlying current of hope, but it’s a thwarted, distorted hope: the kind of hope that Hesiod believed Pandora captured in her jar, the kind that could cause mankind more grief than good. The kind that makes great drama.
But the ending also brings me back to the Obama administration, or rather the transition from the Bush administration to the current one. In the end, Six and Baltar banter back and forth about God’s plan (more God in the details, less in the dialogue, please), but what about God’s previous plan, the one that involved the cylons wiping out mankind? Could it be a reflection of the movement away from the hawkish, rather belligerent religiosity of the Bush administration to the conciliatory, negotiating inclusiveness, hopefully, of the Obama years? Or is it just a neat little deus ex machina package to conveniently end the series?
Either way, this is how it ends, not with a revelatory bang, but a twee whimper. As poster Jason correctly notes, Cavil is not a seven, as I had originally stated, but model one. The “boxed” Daniel is seven. Apologies for not catching the error.