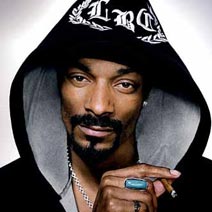 Rapper and sometimes actor Snoop Dogg has revealed that he has joined the Nation of Islam, according to the BBC. After appearing at the group’s Saviour’s Day event in Chicago, Snoop told reporters why he decided to officially join the group though refused to say exactly when he joined.

“I’m an advocate for peace, I’ve been in the peace movement ever since I’ve been making music…My whole thing is not about really trying to push my thing on you. It’s just about the way I live, and I live how I’m supposed to live as far as doing what’s right and representing what’s right–that’s why I was here today.”

I find it very interesting that Snoop Dogg, one of the original gangsta rappers–a genre of rap music that is inherently violent, misogynistic, and advocates drug use and drug dealing–claims to be a peaceful guy. Just a few years ago he was arrested in connection with a murder, and in 2000 he produced a porn, the name of which I probably shouldn’t repeat here. But, to his credit, I haven’t heard of him being arrested over the last year–at one point he was always in trouble with the law for his public marijuana use. And, from what I’ve seen on his E! reality show “Snoop Dogg’s Father Hood,” he seems to be a loving and caring husband and father. So on one hand, good for Snoop! But on the other, well, let’s just say I’m thinking he could have chosen a more peaceful religion or philosophy to adhere to.
From Beliefnet’s Nation of Islam Page:

The Nation of Islam’s declared aim is the raising of the moral, social, and economic standing of non-whites. This has included the vilification of the dominant group, white Caucasians, even to the point of calling whites the personification of evil and maintaining that the white race is an aberration, the human race having originally been black. Therefore, according to this theory, blacks must pursue separate development.

read next post
Review: 'Rag and Bone: A Journey Among the World's Holy Dead'
archives most recent
More from Beliefnet and our partners
previous posts