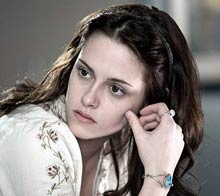 I must admit that I resisted reading the “Twilight” series until a school librarian friend of mine informed me that I absolutely had to read at least the first book before the movie opening. So, being a dutiful friend and pop culture enthusiast, I dove right in, submerging myself in all four books one right after the other–dare I say, I devoured them. (Yes, I said it.) But, I have to admit it was one of the oddest reading experiences of my life. I found the prose a bit pedestrian and was disturbed by the premise of a self-esteem-challenged 17-year-old girl giving herself over completely to her co-dependent manic-depressive vampire boyfriend. And yet, I couldn’t stop reading.

Just like a vampire’s beauty makes him/her the perfect predator, the story of “Twilight” is the perfect lure. Hey ladies, here’s a gorgeous, filthy rich, well-mannered, sensitive man who thinks that you, who’s always been considered the plainest of uncoordinated plain Janes, are a striking beauty. In fact, he will always be there to protect you, he can’t bear to live without you, and the only reason he currently exists is to make you happy, even if that means giving you over to the other man. That is an extraordinarily attractive picture. But, there’s a reason these books are considered fantasy and it’s not just because they contain vampires and shapeshifters.
“I doubt that millions of teenaged girls, or women of any age, would be devoted fans of a series of novels about some happy girl with a ton of self-esteem, her “partner,” their studied lack of emotion toward one another at their liberal-arts college, their smoothly-proceeding hyphenated-names ‘commitment ceremony,’ their overlapping parental leaves and their stroller acquisitions,” a friend of mine noted. It is true that such a tale lacks a certain allure, but what happened to characters like “Buffy the Vampire Slayer’s” Buffy Summers, a popular cheerleader who managed to battle personal demons while actually battling demons?

Maybe we’ve turned a post-Buffy corner, but I was expecting Bella to be a stronger character. Sure, teens have their foibles and their self-doubt, who doesn’t, but Bella’s inferiority complex bordered on pathological and her fear of aging as a human, while Edward remained young and beautiful, sent a skewed message. And while I take issue with her getting married and having a baby all in her late teens, my real issue lies with the fact that she only becomes empowered as a vampire. After the change she gains physical strength and agility, as well as self-confidence, things she was lacking in her human life. What is the message here? That being a strong confident female is unattainable in the real-world?
So, with that in mind, if I was to suggest one young-woman-who’s-in-love-with-a-vampire to be a role model, I would recommend “True Blood’s” Sookie Stackhouse. Sookie has a real confidence and sense of herself even though she has every right to be some disaffected, outsider, thanks to her ability to read minds. People talk about her in hushed tones and think about her in not-so-hushed tones, but she’s just as sweet and sassy as can be. But, she knows how to fight with the best of them, saving Bill from the V dealers. More importantly though, Sookie learned a real-life lesson in the past two episodes–sometimes the hero vampire doesn’t come to the rescue. And while it’s true that Sookie did engage in premarital sex, she did wait for “the one” and it wasn’t like Bella and Edward’s somewhat discomfiting tit-for-tat marital arrangement.
Now I’m not recommending that young teens watch the very torrid “True Blood” and I, admittedly, can’t get enough “Twilight,” but if I’m looking for a role model for young women, I’d stake my claim on Ms. Stackhouse. (And, yes, I said it.) 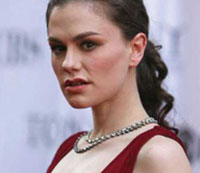