Evan Handler on Faith and Family 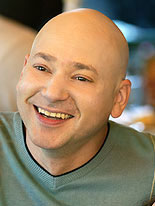 At the Celebration of Jewish Books this weekend in Los Angeles, actor Evan Handler was making his 11th stop on an 18-city book tour in promotion of his new book, “It’s Only Temporary: The Good News and Bad News of Being Alive.”
Handler, perhaps best known for his “Sex and the City” character Harry Goldenblatt, described his current acting endeavor, “Californication,” as “filthy dirty, with an actual heart” (a great description, if you’ve ever seen the show and can see past the, um, Californicating)–a description which, if his presentation was representative of the work as a whole, may also apply to sections of the book. He has a chapter titled “Menace to Society,” in which the author is the menace in question; the chapter describes his irresponsible behavior with women after he recovered from “incurable” leukemia. There was also some graphic, but very funny, discussion of American personal hygiene as seen through the eyes of Handler’s Italian-born wife.

As was evidenced by his appearance at the Jewish books festival, Handler was born into a Jewish family, but described his Jewish upbringing as a watered-down version of Jewish history lessons. He noted that his father felt God most acutely in nature, which mean that he and his sister were constantly trying to bring Christmas into their home. “I never had a religious awakening,” he noted, but that didn’t mean he isn’t interested in ideas like hope and faith. He posited that “false hope” is “a useless, fictional concept. Hope is longing, desire…just what it is.”
He points to certain moments in his life as ones that give him faith…although in what, he’s not sure. He doesn’t know that there is someone or something controlling everything on earth, but he doesn’t know that there isn’t. Due to his treatment for the cancer, doctors had told him that the odds were a million to one against him being able to father a child. But Handler and his wife conceived twice–the second pregnancy carried to term and brought them their daughter. Perhaps this was a sign, Handler said, invoking the Jewish concept of “b’shert” (a destined partner)–“Maybe it was a sign that we were meant for each other.”

read next post
Watch Trailer: 'Last Chance for Harvey'
archives most recent
More from Beliefnet and our partners
previous posts