Celebs Speak Out Against Prop 8 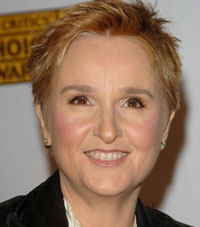 Last week’s election was historic in a major way–with the election of Barack Obama, a Democrat and a liberal supported by many Hollywood folks, it looked like racism had been retired in favor of change and that a more conservative viewpoint had at last been trampled by a promise of liberal change. But in California, while last Election Day was a strike against racism as a campaign issue, it wasn’t a total win for liberals. Witness the “Prop 8” situation.
While most of the people I’ve encountered in LA voted no on 8–which meant a vote in favor of equal rights for all marriages, even between spouses of the same sex — the proposition passed by a narrow margin, causing an uproar from equal rights supporters, celebs and civilians alike, and spawning public rallies against what is being called the “gay marriage ban.”

Many celebs have been vocal about the outcome. Wanda Sykes, Lance Bass and Rose McGowan attended a protest on Wednesday; Sean Penn called the decision “shameful,” and Christina Aguilera and Madonna both expressed their disappointment with the outcome.
And then there’s Oscar and Grammy-winning singer-songwriter Melissa Etheridge, who surmises that if she doesn’t have the right to marry, that renders her “not a full citizen”– and as such, perhaps she doesn’t have to pay taxes:

“I don’t mean to get too personal here,” Etheridge wrote. “But there is a lot I can do with the extra half a million dollars that I will be keeping instead of handing it over to the state of California. Oh, and I am sure Ellen will be a little excited to keep her bazillion bucks that she pays in taxes, too.”

Celebrity DJ Samantha Ronson also had something to say about the fact that a proposition dedicated to humane treatment of animals passed, while human marriage rights are not equal in California:

“I guess people care more about farm animals than they do their fellow man, that’s really sad to me,” Ronson wrote on her MySpace blog. “Yes, I am glad that the chickens will have more room and better conditions as they wait to die, but I just think it’s frightening that people show more compassion for tomorrow’s dinner than for the chef.”