People go to church to seek answers. But seldom are those people sons of rabbis looking for insight into their own Jewish heritage. All of that changes with My Jesus Year, a new book by Benyamin Cohen that also bears the subtitle “A Rabbi’s Son Wanders the Bible Belt in Search of His Own Faith,” and which debuted in the #1 position on Amazon’s Jewish Bestsellers List its first day after publication.After asking himself questions about faith, Atlanta-dwelling Cohen arrives at one question: “What would it be like to be a Christian?” He then embarked on a journey that his website describes as “part memoir, part spiritual quest, and part anthropologist’s mission.”Among his adventures: he jumps into the mosh-pit at a Christian rock concert, has his face projected on the giant JumboTron of an African-American megachurch, visits a potential convert with two young Mormon missionaries, attends a Christian “professional wrestling” match, and waking up early for a sunrise Easter service on top of Stone Mountain– a Confederate memorial and former base of operations for the KKK.The MyJesusYear website reports that the result of the journey was that Cohen found his own Jewish faith strengthened. Sometimes it takes an encounter with something different to figure out where you fit. Check out the trailer here: 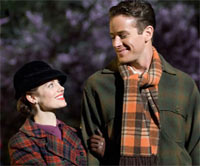 'Billy: The Early Years': A Heartfelt Tribute to Graham
archives most recent
More from Beliefnet and our partners
previous posts