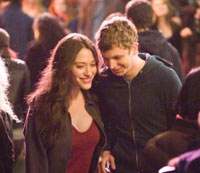 I knew I wanted to see “Nick and Norah’s Infinite Playlist” even before it started getting rave reviews: first of all, Michael Cera, ’nuff said. Second of all, the “mix CD as love letter” is a favorite theme: music is a uniting force, and a way to express all the things you’re afraid to say yourself. (In my day, it was a mix tape, but that’s only the medium that’s changed.)
And in the aftermath of the Jewish identity discussion that surprised me in “Knocked Up,” I’ve been really interested by Jews coming into their own identities on-screen, in a manner more substantial than the regular superficial way that surrounds Jewish characters with the occasional “mazal tov” or the perfunctory “Merry Christmas, I mean Happy Hanukkah.”

Norah sort-of-dates Tal, a possibly Israeli musician whose band “Oz-rael” he describes as “anarchy meets Zionism” and follows it up with his mantra/catchphrase “we bring the Jewfire.” My Own Worst Critic notes the heavy Jewish identity theme in the film, and concludes that Norah’s relationship with Tal indicates the film’s authors’ attitude about interfaith dating:

[Tal] adores Norah and showers her with compliments about her beauty and her maternal potential. To a Jewish mother’s eyes, they should make the perfect shidduch [match]. But he’s clearly not the one for her. Jewish connection is great, the filmmakers seem to be saying, but musical connection is better.
Like “Then She Found Me” and “Knocked Up” before it, the film doesn’t make a big deal out of the Jewishness of its protagonists. Their Judaism is just a fraction of who they are, and the filmmakers see no sense in foregrounding their religious differences with non-Jews. For the glass half-empty types, these films are a sign that Jewishness has become little more than a fashion symbol, as dazzling, and disposable, as the latest model of smart phone. For us half-full types, they offer further proof that anyone can share in the Jewfire.

In an ideal world, a Jewish gal like me would love to embrace such a “Hebrew hipster,” as the site refers to Tal, but from the moment he appears on screen, it’s clear that he’s not the one for Norah. And because Tal is romantic rivals with Michael Cera, I must put aside my own Jewfire and once again embrace Cera’s delightful geeky awkwardness. Besides, Norah, who goes to Catholic school, is probably less concerned with high school dating members of the tribe than she is with finding a companion who understands her.
Norah’s identity as a Jew is also tied to her position, which she downplays, as the daughter of Ira Silverberg, a music industry mogul. She doesn’t like getting things just because of who her father is, but knows that it’s a part of her. Her other legacy is her Jewish identity: while she attends Catholic school on a daily basis, she quotes the principle of tikkun olam— a Jewish concept of trying to fix a shattered world — almost as foreplay. She identifies it as “this part of Judaism that I really like” — it’s a moment of personal revelation and intimacy between Norah and Nick. This isn’t Hebrew school, where she’s being tested on what she’s learned. This is a principle of social justice and activism that she relates to. Nick, on the other hand, tells Norah, “I don’t subscribe to any label,” as much a statement about music as it is about religious/ethnic identity.

I don’t view this as a statement for or against interfaith relationships. It’s high school romance, written smartly, with a substantial Jewish concept not-so-hiddenly serving as the fulcrum of a connection between two kids who love music. Her rejection of Tal isn’t about all Jews being wrong for Norah. It’s about Tal being a jerk, and Norah choosing someone who isn’t, someone with whom she has infinite playlist potential.

read next post
As Election Day Approaches, How to Start the Healing
archives most recent
More from Beliefnet and our partners
previous posts