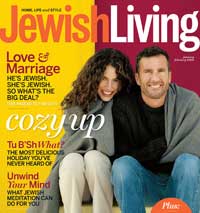 Rosh Hashanah marks the start of the new Jewish year, but this new year brought a tough break for Jewish Living Magazine. Touted a year ago as the Jewish answer to Martha Stewart Living, the glossy magazine hoped to compete in a world where it’s becoming increasingly difficult for a magazine of any sort to stay afloat, let alone make a substantial profit.
The last few months has seen the folding of two Jewish magazines that I’ve enjoyed: Jewish Living, and American Jewish Life. Other magazines are still hanging on, but many have private funding and don’t rely on advertising alone, as traditional magazines did. Of course, writers and editors are not in it for the money (or we’d be doing something else, believe us). But maybe it’s just too much to try to make a profit on a magazine that appeals mostly to such a small percentage of the world population.

Magazine publishing is a tough sell to advertisers–only the names we already know as prestigious are still managing to make a go at it, and they’re only succeeding by integrating online content and largely on the laurels of their reputations.
Despite the bad news and the number of print publications (magazines, newspapers, and even book presses) which fold every year, the publishing world is only mostly dead (which, as any Princess Bride fan can tell you, is “partly alive”). There’s still something about holding a product in your hand, something that you’ve worked with or grown with, or connected with. And as a writer, there’s something about having your name on a page you can touch that the internet, as a largely intangible medium, can’t compete with.
As the industry evolves, we’ll probably see this struggle again–the latest battle between the pragmatists, who realize that the future (and actually, the present) is online, and the poet-aesthetes who may not really fear change, but who wish that certain things would remain the same.