Am I the Only Person Who Liked ‘Breaking Dawn’? 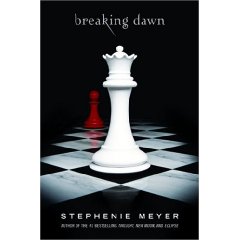 But I’d already made a big decision about when I’d satisfy my vampire cravings (so to speak). In a heroic effort, I stayed away from all online chatter about “Breaking Dawn” for a full week, so I could really, really, really enjoy my the novel on vacation (beginning on August 10) while floating in an innertube in the Caribbean. Which is exactly what I did.
The only thing I knew (unfortunately) before I left was that there was a BIG BACKLASH and that it was being covered in all the major magazines,newspapers, and blogs. My initial thoughts were: “Oh no! Team Edward suffers a horrible defeat. Bellaends up with Jacob and Team Jacob prevails,” or possibly, “Gaahh! Bella doesn’t become a vampire after all!”
When I actually read “Breaking Dawn,” however, I was mystified by what fans were so upset about. And I didn’t find out until I got back this week.
So…SPOILER ALERT…What in the world are people so upset about?

Granted, though I was elated that the wedding between Edward and Bella went off without a glitch right away, I was a little put-off by the scary-baby incident (though once I was into the story I saw it coming). By the time I was further into the story I also had a feeling that Jacob would imprint on her, solving Jacob’s broken heart situation, so, though it is weird to think of Jacob destined to end up with a, um, baby as his soul-mate, I was ready for it when it happened.

But I was so happy that Bella and Edward got married!
That Bella became a vampire!
That Bella was a stellar new vampire–like the vampire world had never seen before!
That Bella turned out to be the strongest vampire of all and with the best super power!
That, in the end, everyone, but Bella and Edward got to live happily ever after!
Yay! I love a happy ending. Especially when this is the ending I wanted for the “Twilight Series” (perhaps minus the baby, but still, in the end I found it all interesting).
Call me sappy but: is this crazy backlash really justified? I mean, the most popular review on Amazon.com (which gives the book only one star) rails on Meyer for the ending being too happy! What?! And what’s this not so subtle anger suddenly about Bella getting married at 18 and having her marriage turn out to be happy and fulfilling? Rage that Meyer has “glorified” this possibility? We all knew Bella was headed in this direction for ages–Meyer prepared fans for this well. I wonder if what people are really angry about is the fact that Stephenie Meyer’s Mormonism (well known now by all) likely influenced her portrayal of early marriage and children, and fans are ultimately uncomfortable with Meyer’s religious affiliation? Is that what people are really upset about deep down?
The vicious attacks Meyer is getting about delivering a happy ending that includes a happy marriage and family mystifies me. I mean, this is fun, fantasy fiction. Most of us wanted Edward and Bella together in the end. Meyer gave us this and more.
What’s the problem then? Really? Is it, in the end, discomfort that Meyer’s faith has influenced the series far more than fans can handle? I can’t help but wonder…
read next post

Interview with The Little Mermaid: Jodi Benson
archives most recent
More from Beliefnet and our partners
previous posts