Recommitment Ceremony for Madge and Guy During ‘Shabbat of Consolation’ 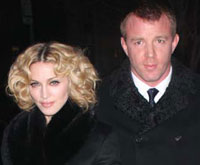 First a bit of Jewish education:
Shabbat Nachamu, the “Sabbath of Consolation,” comes the weekend after the Jewish holiday of Tisha B’Av, a day of mourning and fasting commemorating the destruction of the Temple. There’s a special synagogue service that includes songs of mourning and the reading of the book of Eichah, which describes the wreckage resulting from the destruction of the Holy Temple.

Tisha B’Av (the 9th of the Hebrew month of Av) itself is preceded by three weeks of limited mourning–while it’s not a period of fasting, religious Jews may refrain from seeking out live entertainment, and during the last nine days before the fast day, will likely not eat meat as a sign of the restriction of happiness. For traditional single Jews, the Shabbat after Tisha B’Av often brings summer singles retreats weekend, as after mourning, there’s a drive to find things to celebrate. Got it? Good…
And now, the celebrity angle: As vegetarians, Madonna and Guy Ritchie aren’t going to miss the meat of the three weeks. And since they’re practitioners of Kabbalah, which isn’t to say that they’re Jewish, they’re likely not fasting on Tisha B’Av either. (In fact, model Naomi Campbell recently said that Kabbalah is more of a rehab-style program, like Alcoholics Anonymous, than it is a religion.) But the celebrity supercouple is taking consolation in the fact that they’ll reportedly be renewing their marriage vows over Shabbat Nachamu (according to Marie Claire UK, among other places):

Madonna and Guy’s vows will be witnessed by family and friends at their Ashcome estate in Wiltshire and two rabbi friends are also flying in from New York for the ceremony.
One insider revealed: ‘They have a special Shabbat party in August, which they want to do once a year to declare their feelings for each other.
‘It’s a very important dinner for them– they want everyone to know they are still in love.’

I hope that the final sentence of the vows reads, “True blue, baby I love you.” 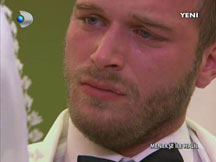