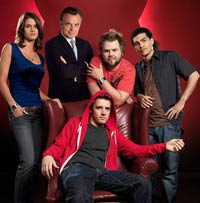 In a television season stymied by the writers strike, “Reaper” emerged as a rare critical hit for The CW. “Reaper”‘s blend of comedy and demonology has echoes of cult hit, “Buffy the Vampire Slayer.” But despite rave reviews, “Reaper” remained on the bubble for renewal until this week. So, what makes the show so tough for audiences to embrace?
“Reaper” begins with a horrific premise. Parents fighting for their own survival pledged their first-born son, Sam (Brett Harrison), to the devil (played with plenty of guile by Ray Wise). When Sam achieves independence at age 21, the devil calls in his contract. How can Sam pay off his debt? By serving as a reaper, sending escaped souls back to hell. In each episode, the devil presents Sam with a vessel to capture a delinquent soul. Vessels have ranged from a Dirt Devil vacuum cleaner to a Polaroid camera. The captured souls are then dropped off at the gateway to hell—a DMV office!

What do I like about “Reaper”? The comic book sensibility blends broad humor with supernatural digital effects. It captures the dead end existence of a Home Depot-style job. Sam and his friends Sock and Ben are caught in their own personal hell at the Workbench. Their manic energy feels utterly natural. The dark premise is counterbalanced by the trio’s small, quirky victories.
What keeps viewers away? “Reaper” is almost a complete inversion of “Touched By An Angel.” Instead of helping a weekly guest star, Sam serves as the devil’s bounty hunter. While he rids the earth of plenty of evil, Sam must also consign people to hell. That is a heavy subject for a comedy. Yet, the devil’s desperate attempts are always leavened by surprising truths. He is disarmed by pacifism. The devil’s power vanishes in the face of true love.
Producers Michelle Fazekas and Tara Butters keep the show anchored in big secrets. “Reaper”‘s subplot involves an ongoing rebellion against the devil. On the personal side, the show suggests that Sam may be dating the devil’s daughter. But what if Sam turns out to be the devil’s son? Thankfully, these haunting questions can play out during a second season. Tune in Tuesday (after “American Idol”!) for the season finale.
–written by Craig Detweiler

'Prince Caspian': Christian Movies for Everyone?
archives most recent
More from Beliefnet and our partners
previous posts