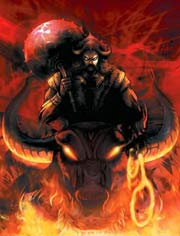 For me, it’s always been hard to picture the divine. Yeah, in Jewish tradition, there’s the story of Jacob wrestling hand-to-hand with a purported angel in the Book of Genesis. And, in Islam, the angel Gabriel visits Mohammed on more than one occasion, flying with him to Jerusalem, discussing life with him, and delivering the Qur’an to (or through) him. Christianity, too, has an angel visit young Mary and tell her of her future role as the mother of Christ.

So, angels, ok. I guess I can somewhat see angels. Vaguely. But God? Am I even supposed to picture God? And what about lowercase-g gods, such as those in Chinese traditions or African tribal religions? Or Hinduism? How do I wrap my mind around their acts, their existences, or their stories?
Well, when it comes to that last case, Hinduism, I’ve discovered a terrific entry point into this issue–visualizing a tradition’s divinities–and a really entertaining introduction to its great myths: A comic book. Specifically, a comic book series from Virgin Comics, “Deepak Chopra Presents India Authentic” written by Saurav Mohapatra and illustrated by a large team of artists. Overseen and prefaced by the renown Chopra, India Authentic, with its rising sales, is the visual version of Hindu Myths for Dummies made for and by rather sharp people.

Technically, “India Authentic” is an anthology with each story focused on a particular divinity or cultural hero. Whereas the first collected volume featued notables like Shiva or Kali, the new second volume still has a wealth of characters to address: Vishnu the Preserver, Yama the God of Death, and Parashuam the Avatar among others. These are in no way “secondary characters” in the Hindu pantheons nor are their stories sketchy outlines of their biographies. (Can a god have a biography?) Instead, Mohapatra frames each story as a crucial vignette in the overall narrative of the character–a particular interaction with another legendary being or a singular conflict that is so pivotal is takes place somewhat outside of traditional space or time. It happened, but it’s always happening.

What makes all of this so effective and impressive is that these gods and near-immortals exhibit very human concerns. In fact, many of the stories allow the pictures to “breathe”–to dominate the space of the page–as the reader is exposed to the protagonists’ thoughts. Inner monologue is not something I commonly associate with sacred stories; we never get inside either Moses’ head as he leads Isaac up to the sacrifice or Jesus’ thoughts on Judas or Mary Magdelene. “India Authentic” takes readers inside the super-humans who still seem identifiably human-like.
Nevertheless, each story operates in a sort of god-logic (or, maybe more precisely, Hindu theo-logic), where devotion, will, or ethic leads to a transcendent resolution. These are not Aesop’s Fables with some simple moral to convey. Instead, “India Authentic” demonstrates universal themes refracted through Hinduism–both pictorial introductions and everyday reminders.
–By A. David Lewis