The Night the Rabbi Went 10 Rounds? 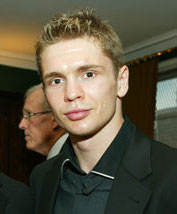 Which is more draining, world-class athletic training or rigorous spiritual and intellectual learning? Ask Yuri Foreman, a fighter who will defend his light middleweight boxing title tonight, and who is studying to become an Orthodox rabbi.
The 27-year-old was born in Belarus and grew up in Israel, but didn’t become religious until he met (at Gleason’s, a famous boxing gym in Brooklyn, N.Y.) and married Leyla Leidecker, a Hungarian amateur fighter and former fashion model who had converted to Judaism herself only two years ago.

Some rabbis say boxing and devout Judaism don’t mix, citing Jewish teachings against intentionally harming yourself, much less others. But others say long-term injury isn’t the point of boxing, only an associated risk. “Does that mean he can’t go bungee jumping, or get in a car or a plane,” asks Rabbi Benjamin Blech in a New York Times article about Foreman.
As with many athletes, Foreman’s biggest challenge is abstaining from boxing on the Sabbath. When he can’t avoid a Saturday night fight, he remains in walking distance of the arena, so he doesn’t have to transgress Sabbath restrictions against riding in a vehicle. And he relies on prayer to keep him kosher—literally. When HBO officials called him into the ring for a Saturday evening bout early last summer, Foreman pulled his cornerman aside and said a few prayers until the sun slipped below the horizon.

read next post
Watch Video: 'Lord Save Us From Your Followers'
archives most recent
More from Beliefnet and our partners
previous posts