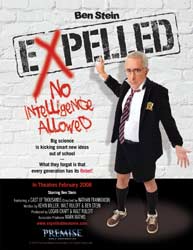 There’s a wonderful moment toward the end of “Expelled: No Intelligence Allowed,” Ben Stein’s new documentary on the intelligent design controversy, where Oxford zoologist and outspoken atheist Richard Dawkins speculates on how life came to be. Beings from somewhere else in the universe, he says, may have developed self-replicating molecules and planted them in the primordial ooze, giving birth to the first single-celled organisms and the great chain of evolution. Even cold-eyed rationalists, it seems, have their creation myths. To see Dawkins pitch his, hedging and hemming as he goes, is more than odd; it’s daffily sweet.

And it’s the non-religious aspects of intelligent design Stein tries to convince us we should be worried about. In his rather ham-handed opening scenes, full of foreboding references to the splitting of Berlin by Communist Germany and our own civil-rights battles of the 1960s, Stein sells us his movie as an investigation into why intelligent design has been suppressed on university campuses. He is shocked to find that some qualified scientists have been sidelined, denied tenure, and even fired for entertaining thoughts about a conscious creator. A former White House speechwriter, author, actor and television personality, Stein here plays the slightly befuddled, increasingly outraged Everyman—a role perfected by Michael Moore—on a quest for answers.

His interviews with those who have been “expelled” for their association with intelligent design are often poignant and impassioned. The astronomer Guillermo Gonzales, denied tenure last year by Iowa State University, has a quiet sincerity that summons one’s protective instinct. Stephen C. Meyer radiates the authentic outrage of a man whose sanity has been questioned. Their point, as it is presented here, is simple: If Darwin’s theory of evolution cannot fully explain the origins of life, why not give them room to seek other explanations?
It’s a perfectly good question, but Stein soon abandons it to chase others. Some are interesting—does serious scientific inquiry necessarily lead to atheism?; others are provocative—did Darwinism lead to the Holocaust? But soon all the questions, for Stein, boil down to the Biggie: does God exist or not? In his showdown with Dawkins, Stein quizzes the scientist on whether he believes in Yahweh, Allah, Shiva—anyone? No, no, and no, come the answers, but as Stein mutely glares in triumph, what’s left of his film’s argument goes down the tubes.
Not that the argument was ever very serious. Along with his interview footage, he mixes in archive material from the building of the Berlin Wall, outdated P.R. reels and educational filmstrips, all ridiculing “the establishment,” until “Expelled” starts to play like an evangelical “Reefer Madness.” (Beefing up the Michael Moore parallels, Charlton Heston is shown here getting hosed down by a hirsute, Darwin-gone-wrong prison guard from one of the “Planet of the Apes” flicks.) Other propaganda techniques are more subtle. The camera repeatedly scrolls the texts of what appear to be dossiers on persecuted scientists, complete with passages censored with thick black marker: only by peering closely do we see that the documents wouldn’t pass even Dan Rather’s smell-o-meter.
Stein’s gimmicks often intrude just as professors on either side of the debate are getting to their best points. One disappointed scientist posits that the academic community’s vociferous rejection of intelligent design has something to do with funding. The pursuit of science depends in this country on grants from foundations and even governmental bodies that are susceptible to nonscientific pressures in their decision-making, including politics and religion; in this arena, intelligent design may be seen as unfair competition. It’s a jarring moment of relevance, but no sooner has the word “money” been blurted than Stein cuts away. Earlier, Michael Shermer, editor of the rationalist journal “Skeptic,” floats the idea that “there was more to” one case of scientific ostracism than simple prejudice. Was there? Stein exhibits no curiosity.
Like many cannonades in the culture wars, “Expelled” is designed to not to scatter the enemy, but to hearten the loyal. After the Potemkin battle is inevitably won, Stein is sure to award himself a gaily ribboned medal. His own peroration is intercut with footage of President Ronald Reagan speaking in Berlin, challenging Gorbachev to “tear down this wall,” equating “Expelled” with the fight against Communist oppression and Stein himself to the Great Communicator. If you believe that one, you’ll believe we were put here by space aliens.
read next post
Watch Clip: Ben Stein's 'Expelled'
archives most recent
More from Beliefnet and our partners
previous posts