We at Burn or Burn are always working hard to come up with good fire-related puns to attach to our recommendations (or disses) of today’s faith-minded albums, and we’d like to thank the Mountain Goats for making this one easy: there’s fire all over the place on the album; plus, you know, heretics. So let us take up the question of whether their new album, “Heretic Pride,” should be tied to a stake and set aflame like a jewel-boxed Joan of Arc. 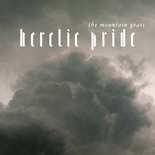 “Heretic Pride” is hailed as a return to fiction by John Darnielle (the founder and only permanent member of the band) to fiction; his previous three albums, especially the critically lauded “The Sunset Tree,” about his abusive stepfather, tended toward autobiography. This record is a series of character sketches, many of them about people in dire straits. This is nothing new for Darnielle, who for years wrote songs chronicling a hopeless fictional couple’s disintegrating, addiction-damaged marriage.

Mountain Goats songs manage to extract hope from the darkest places, though, and “Heretic Pride” is optimistic even as it chronicles destruction. The music is more fleshed out than previous Goats records, as strings, organ, and electric guitar add tasteful accompaniment to Darnielle’s acoustic guitar and plain-spoken vocals.
The title track is sung by an exuberant, defiant heretic–“I feel so proud to be alive,” he proclaims in his final moments before death by burning, “transfiguration’s gonna come for me at last.” On “New Zion,” over just a hint of reggae rhythm, a cult member who’s lost his fervor for the movement skips out on a revival meeting to go lay down by a river, dreaming of “old things made new” while “waiting for you.” We don’t know who “you” is, of course, but we can guess.
Darnielle has a pretty weird voice for a singer/songwriter—blunt, sharp, edgy—which makes his tenderness all the more endearing. “San Bernadino” is the album’s most blatant celebration of hope. A young couple in a motel prepare for the birth of their son; “they feel at home in the world,” Darnielle wrote in an essay for eMusic, “even though the world isn’t giving them its best yet. I feel hope for them, because they love each other.” Another track examines “Tianchi Lake”(“Heaven Lake” in English), on the China/North Korea border. Surrounded by preachers and temples, the lake’s apocryphal monster–mystery and spirit incarnate, perhaps–quietly backstrokes, unnoticed but alive.
Remember, this isn’t Unbeliever Pride we’re talking about; “Heretic Pride” can be read as a celebration of (literally) unorthodox belief. Heterodoxy, heresy, is still belief, and some we now call saints have been accused of such belief. The album ends, unsurprisingly, with a house on fire. Somebody make sure to dash in and save a copy of “Heretic Pride” before the whole thing goes up in smoke.