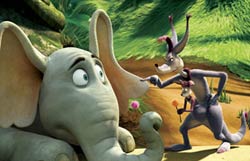 How many times have you asked yourself, when reading a newspaper headline, “What were they thinking?” Sure Gov. Eliot Spitzer’s head-scratching admission to patronizing a prostitute elicited the most furrowed brows this week, but it was TMZ.com’s report of pro-life protesters disrupting last Saturday’s Hollywood premiere of Dr. Seuss’ “Horton Hears a Who!” that really blew my mind.
According to the site, “All hell broke loose at the Hollywood premiere of “Horton Hears a Who!” today when a group of pro-lifers infiltrated the screening, then chanted anti-abortion slogans after the flick.”

“After the chanting ended, the group put red tape over their mouths that said “Life” on them, and paraded around the event.”
The message of “Horton Hears a Who!,” that “a person is a person, no matter how small,” has been co-opted by right-to-lifers even though the good Dr., a.k.a. Theodore Seuss Geissel, reportedly wrote the book as a response to the atomic bomb and threatened to sue one pro-life group for using the slogan on its stationery, according to biographer Philip Nel.
And in 2001, Audrey Geisel, Dr. Seuss’ widow and supporter of Planned Parenthood, filed suit in a Canadian court against Action for Life Ottawa for using the slogan on posters.
Last time I checked, abortion was still legal in this country, copyright infringement less so.
But, wherever you stand on the issue, it think it can be agreed that the premiere of a children’s movie is simply not an appropriate place to protest. Not only will the activity possibly scare, not to mention scar, the children in attendance and ruin what should have been a family-friendly day, but it is certain to backfire and create negative publicity.
We are outraged when children are used as foils in actual warfare, so shouldn’t we try to protect their innocence from being used as protest props in ideological warfare? Did the group of protesters really think this would promote their cause in a positive way?
TMZ reports that audience members fired back with “This is a kid’s premiere!” and “How dare you!” but I’m kind of hoping that at least one member returned Seussian fire by quoting Yertle the Turtle and proclaiming, “You hush up your mouth!” 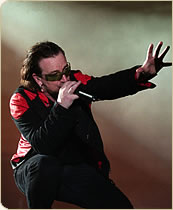