Science Takes Another Hit in ‘The Spiderwick Chronicles’ 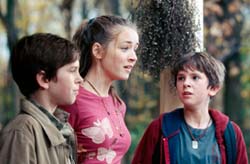 Evangelical Christians and conservative Catholics gnash their teeth a lot about how Hollywood corrupts youth and demoralizes the faithful. But if it’s true that the enemy of your enemy is your friend, Hollywood and conservative Christians, who’ve both been putting the hate on scientific rationalism lately, should get along just fine.

In “The Spiderwick Chronicles,” which debuts tonight on IMAX screens across the country, a scientist by the name of Arthur Spiderwick (the consistently excellent David Strathairn) stumbles upon the existence of the fairy world, a supernatural realm full of wondrous sprites and, problematically, goblins ruled by a unappeasable ogre. A confirmed rationalist, Arthur thinks he can conquer this world by cataloguing and classifying it, and contain its evil by controlling the knowledge he’s collected.
This is Enlightenment thinking, the sort Christian critics rail against, and they should be cheered that Spiderwick’s Darwinian categorizing doesn’t work out, in spades. It takes his great-great nephew Jared Grace (nudge, nudge) who finds Spiderwick’s magnum opus and accidentally unleashes the forces of evil, to save the day (and the world) by knocking knowledge off its pedestal and replacing it with love.
This is the same lesson is at the heart of Philip Pullman’s “The Golden Compass,” the movie version of which premiered at Christmas to the disgruntlement of Catholics. True, in his captivating novel Pullman slates the Church—or at least some parallel universe version of it—as an institution more interested in power than good, repurposing Vatican terms like “oblation” and “Magisterium” to unflattering ends. But it’s the scientists who are the true villains of Pullman’s world, do-gooders who think the key to undoing evil lies in the arrangement of molecules and atoms. In both “Spiderwick” and “Golden Compass,” the scientists’ knowledge becomes a kind of innocence. They lose sight of simple right and wrong and lose their way, or fall into the clutches of evil.

All of which can be great fun to watch on a screen several stories tall. The movie brings to life the slobbering, clamoring beasts of the best-selling Spiderwick series of young adult novels without making them too scary for littler viewers. The most astounding technological feat of the movie is the doubling of Freddie Highmore, who plays both Jared and his twin brother Simon not only as distinct characters but distinct expressions of the same DNA. As always, fans of the books will quibble with what the filmmakers left out, but even the Spiderwick stickler I attended with gave the movie above average marks.
If my textual literalist can see past the letter to the spirit of what’s on the screen, surely the warring Christians and Hollywood suits can too.
read next post 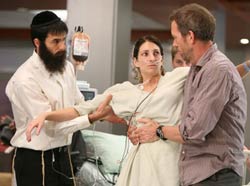