Your Season’s Greetings: Too Generic, or Too Personal? 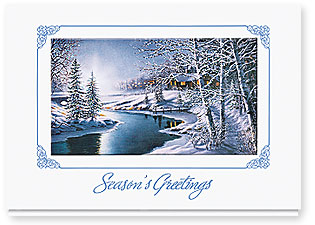 ‘Tis the season for season’s greetings, as winter-themed cards, family portraits and business announcements wing their way around the world to bring messages of peace and networking to all humankind. But are your greetings too generic? People don’t read cards that are so general that anyone (or anyone’s secretary) could have written them. And then there’s the opposite extreme, when someone sends you a three-page typed account of everything they, their business and family have done in the last year.
When it comes to our season’s greetings, why can’t we figure out the perfect balance between personal and perfunctory? Maybe it’s because of that pesky little thing called technology?

We are out of practice as letter writers, now that e-mail and blogs have taken over as the daily carriers of our casual conversations. Photocopiers, fax machines, e-mail and personal Web pages, with their capacity for speed and mass production, might seem to increase the opportunities for the sweet exchange of letters, but wait! With technology, comes a decrease in intimacy as well as a lack of permanence. Gone is the personal handwriting, the choice of ink, the perfumed or monogrammed paper or the child’s smudged fingerprints or drawings. If my father had written an e-card to Santa in 1935, I wouldn’t have stumbled across the letter 70 years later and realized that the young boy who asked for a toy sailboat with a jib had later become the boatbuilder and naval architect that I knew.

The piece in the Christian Science Monitor continues to wax rhapsodic about the value of the written word and how it’s being lost to technology’s time-crunch, before ending with this:

Then put on the Christmas carols, pour yourself an eggnog, open your desk and your heart, and give yourself a moment of solitude to pen your holiday greetings. Replace the emptiness of junk mail or the impersonality of e-cards with the gratifying connection of a written conversation, and you will feel yourself in the good company of the recipients. Imagine the anticipatory frisson that comes when your loved ones see your handwriting on an envelope in their mailbox. As Voltaire remarked, “The post is the consolation of life.”

Voltaire meant post as in “mail.” But even if we mean post as in “blog post” or “web content” or anything written in or outside the technology framework, it is my non-denominational prayer, as a writer, that we all consider the potential power of our words, and that we use them to connect meaningfully with others this holiday season.