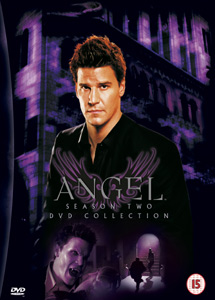 In writing up a comment to a previous challenge by my colleague Michael Kress that IC readers tell us about our favorite on-screen angels, I started thinking about Clarence, from “It’s a Wonderful Life,” and ended up with my favorite tortured vampire-in-a-trenchcoat, Angel. And that’s when it occurred to me that I had a different take on angels, using a more liberal, less literal definition toward a list that’s a bit more on the unusual side.

Starting with the eponymous “Angel”: David Boreanaz plays a tortured “vampire-with-a soul” in the spinoff from the cult hit “Buffy the Vampire Slayer.” Thanks to a gypsy curse, he possesses all of the evil inclinations of a bloodthirsty vampire, but his soul has been reinstated, keeping those inclinations from translating into action. He even goes one step further, making it his business to rescue people from demons, danger, or themselves. What results is a unique hero — evil’s conscience turning a demon into an agent of good and redemption. Plus, the show’s heart — which embraced onscreen tragedies and blended it with a distinctly humorous streak — earned points for both personal pathos and the pop culture understanding of what a vampire is.
I would also add the angels of journeying and time travel to this list, which would include “The Fugitive”‘s Richard Kimble (in the years before and after Harrison Ford’s incarnation, the original TV version and the Timothy Daly-starring remake kept running week-to-week, touching people’s lives in different cities before being forced to flee yet again); “Quantum Leap”‘s Sam Beckett, who leaped life-to-life into grave moments in other people’s bodies, and had to make the right decisions that would help them avoid tragedy or achieve a certain destiny; and even NBC’s current “Journeyman” Dan Vassar, who — though able to jump into other people’s storylines to help them, so far seems to be geographically bound to San Francisco.

Beyond the level of literal angelhood, we can sometimes see angelic moments in people who have previously been anything but. And in popular culture, sometimes angels take the form of inner demons, torturing people who want desperately to care only about themselves.
“Rescue Me“‘s Tommy Gavin, a hero by virtue of his profession and desperate to be a hero to his children, seems to only be an angel when surrounded by fire and danger; on a daily basis, he behaves contemptibly, is engaged in constant battle with himself that stems from an emotionally abusive family and survivor’s guilt over 9/11.
Doctors Sean McNamara and Christian Troy from “Nip/Tuck” are far from exemplary family figures or even human beings; in their work, they surround themselves with people who are battling to change outsides instead of insides, but occasionally take cases pro bono and because an individual’s story moves them, and because they have the power to help. 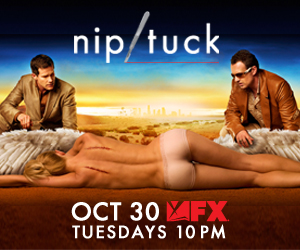 Still, the promos for the new season, which moves them from Miami to Los Angeles, focuses heavily on angels, and the removal of their wings (see ad at left)…is this more of a comment on the profession of plastic surgery, or the culture of “the industry”?
While these pop culture figures are not angels in the traditional winged sense, I’ve always believed that sometimes salvation comes from above, sometimes from a person at your side, and sometimes from yourself. I always liked the image of Clarence, a flawed spirit trying to help others and earn his wings. Maybe angels aren’t born, they’re made, by all of us. I’ll definitely think about that next time I hear a bell ring.
read next post

Divisadero – Of Intersecting Lives, Divides and Links
archives most recent
More from Beliefnet and our partners
previous posts