When a Wand is More Than Just a Wand: Rowling Outs Dumbledore 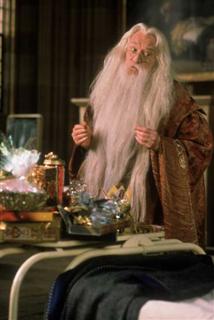 Yes, we were tired of the news being “the Britney Channel.” But over the weekend, a new kind of celebrity non-news hit, with the outing of a Harry Potter character.
In case you haven’t been paying attention, here’s the recap: Albus Dumbledore. Gay. And in love with Grindewald, a rival wizard, whom he defeated in battle.
All that talk about powerful wands, and we never suspected a thing.
[spoilers after the jump]

The announcement came as part of an “Open Book Tour”–the night of this revelation happened at Carnegie Hall, in response to a question about whether Dumbledore finds true love. (Which to my mind, is a silly question, because he’s dead, but then again, I’m not a rabid pre-adolescent fan, and his state of being deceased didn’t seem to stop him from talking to Harry.) Although I have to admit that this kind of tour is a really interesting idea (not to mention profitable, I bet), this kind of question does remind me of the Saturday Night Live sketch featuring William Shatner at a Star Trek Convention. I wonder if JK Rowling ever just turns to a fan and says, “You know what? It’s over. Get a life.”

[S]he regarded her Potter books as a ‘prolonged argument for tolerance’ and urged her fans to ‘question authority.’ Not everyone likes her work, Rowling said, likely referring to Christian groups that have alleged the books promote witchcraft [ed: or not, see our non-Satanic post here]. Her news about Dumbledore, she said, will give them one more reason.

That’s good…always give the haters what they want, another reason to hate you. But the good news for fans eager for another Rowling book that they’re not going to get–they have a new task: to reread the entire series and look for clues of Dumbledore’s sexual orientation. Which is good, because having all those mopey kids missing Harry Potter was getting me down. Back to the books, kiddies! Let the renewed sense of purpose fly to you like a pencil levitated by Hermione…Wingardium leviosa!