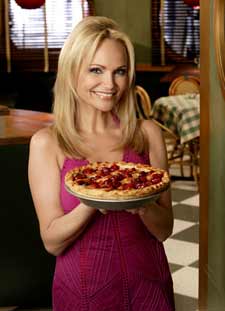 Curl up in your comfiest blanket and prop yourself with a stack of soft pillows. Close your eyes, put a smile on your face, and let yourself drift back to that time in childhood when storybooks carried you gently off to dreamland.
Are you there yet?
Open your eyes, but don’t move. Just watch “Pushing Daisies.”
ABC’s peculiar new television series “Pushing Daisies” is both a magical and mysterious show to watch–an ineffable, playful hour-long something that reaches deep into your heart and soul and past and shows you how it’s possible to be at once the delighted child, the love-struck adolescent, and the confused, quirky adult struggling to be good and ethical and responsible, yet who is tantalized and tempted by the enchantingly forbidden, beguiled by the aroma of a just-made apple-pie-with-gouda-crust sitting on someone else’s windowsill to cool.
If only we could take just a tiny slice….

“Pushing Daisies” protagonist Ned is this trinity of persons–the wide-eyed child, the infatuated teenaged boy, and the tormented, delighted, and delightful man. Charlotte (nick-named Chuck), his childhood sweetheart, is that delicious pie in the window that he longs to steal away. Ned and Chuck are adults in love faced with impossible restrictions for expressing their innocent, yet powerful wave of emotion (if Ned touches Chuck, she’ll die. Literally), so impossible that their romantic negotiations become the stuff of candy-coated fairytale love topped off with an eccentric, sweet-natured humor.
The standard path for building romantic tension between two lead characters in a television series is as follows: (1) discovery of interest (which often can last a season or more), (2) the realization of romantic desire, but often for a painfully short episode or two, at which point (3) something shows up to derail the relationship, until (4) the series rinses and repeats this formula.
But “Pushing Daisies” laughs at this method (though the show enlists a brilliantly cast Kristin Chenoweth as Olive Snook in the role of “romantic complication”). The show’s very essence is its childlike, innocent open-book approach to emotion. It wears its heart on its sleeve from moment one. Ned and Chuck are lovers at first sight, from the moment they shared a sweet, kiss as children, only to part for many years and then lay eyes on each other again as adults and find that their love is just as pure and alive (so to speak) as if they’d never lost each other in life or in death (at least in the case of Chuck). Their affection abides without so much as a kiss or even a touch–at least not without gloves. Which makes the spontaneity of Chuck planting passionate kisses on a surprised Ned between the safe coating of plastic wrap (so she doesn’t die) all the sweeter and more hilarious.

Love grows from mere knowledge of each other’s existence, from stilted, on and off again whispers and glances, from batting eyelashes and shiny childhood memories. What a strange play between the innocent and the erotic!
If deep down you are a romantic at heart, yet you like your romance doled out with the sensibility and slightly dark touch of an indie film (emphasis on the slightly when it comes to the dark) and the stylized finesse and musicality of a movie like “Down With Love” (go out and rent it if you haven’t already seen it), then “Pushing Daisies” is a television MUST this season.
How the series plays out this odd, intensely romantic set of circumstances will be interesting to watch. It has me wondering: What it is it exactly that appeals about this highly-stylized, odd-ball storybook tale? What does it say about what we as adults long for with all its quirky romantic moments, temptations, and eccentricities?
A bizarrely romantic take on abstinence, if you ask me. 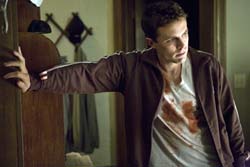