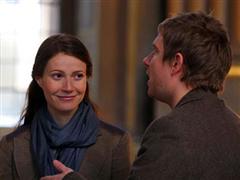 Nobody’s perfect. Especially not Jews, according to Ann Coulter. But that news is SO last week. This week, the hate is on Gwyneth Paltrow for her comments about the character she plays in “The Good Night,” the new movie directed by her brother Jake.
Gwyneth, previously adored by the Jewish community for her mere lineage of being the daughter of the talented Blythe Danner (who played the mom in the “Brighton Beach Memoirs” movie and is therefore an honorary Jewess) on one side and for her connection to the Paltrovich rebbe on her father’s side, slides down the approval index for her comments about “Dora, the protagonist’s waking-life girlfriend,” as New York Magazine reported:

Gwyneth is barely recognizable: pale, with a cape of dense brown hair, bundled in shapeless cardigans. “It was me physicalizing my New York Jewish half,” jokes Gwyneth. (Her rep as a shiksa goddess notwithstanding, the actress is in fact, as a friend likes to call her, “Gwyneth Paltrow, the descendant of ancient rabbis.”)

To see how much is “barely recognizable,” check out the picture above. She has brown hair. What a transformation! And nice that she thinks that “New York Jew” means messy and unattractive.

I haven’t even seen the film yet, but Forward writer Elissa Strauss has, and writes about Gwyneth’s portrayal in an age of lovable Jewish schlubs; why haven’t the women caught up in terms of their likability?

For Paltrow, New York female Jewishness translates to a pestering, sexless creature, devoid of any sensuality and emotional generosity. This reading is, to anyone who has had the pleasure of acquainting himself with any of the Jewish women of New York, tired ground.