Anyone wanting to see America’s religion at work might tune into HBO tomorrow evening for the documentary “Run, Granny, Run,” chronicling the unlikely 2004 campaign of a 94-year-old New Hampshire woman named Doris Haddock for a seat in the U.S. Senate. Haddock first made her name in politics in 1999, when, as Granny D., she walked from her California home to New Hampshire to protest what she believes is a corrupt campaign-finance system. She walks for the Senate campaign as well, greeting people along the way with a determined but kind respect and carrying a bright yellow flag on her shoulder, and looking like nothing so much as a Buddhist monk. Only Haddock’s god is democracy.The parallels between Granny’s devotion to America’s democratic ideals and religious faith is everywhere in this film, from her conversion to the cause after, as she says, “death came,” taking her husband and best friend, to the way politicians buddy up to her to imbue their own agendas with higher principles. (It’s also interesting to watch those who have shown themselves to be embarrassed by spirituality in the public square, like Howard Dean, villainously turn their backs on her.) At one point, a campaigner lovingly adapts the old hymn “Just a Closer Walk with Thee” to Haddock’s quest.Haddock wants to fix the system, but her zeal is a missionary’s, not a reformer’s. Haddock’s implacable, deceptively naive public style, as well as her age, constantly invite comparison to Mother Teresa. “I’ve never seen anyone so able to withstand suffering,” says Haddock’s son, as we watch the nonagenarian huff and puff, mostly ignored, along a busy New Hampshire highway. Haddock, of course, isn’t the only one conflating faith and politics. In the film’s climax, the humble granny debates her opponent, the incumbent Republican Judd Gregg, depicted here as an oily tool of the system. In the Republican boilerplate of the day, Gregg cautions that Iraq War in the Middle East is a fight between Muslim extremists and democratic Western values. In his unflinching debate-face we read that it’s our faith against theirs. Whichever political camp you’re in, “Run, Granny, Run” is a rich depiction of how church and state, often depicted as oil and water in our political system, are of the same substance in our hearts. 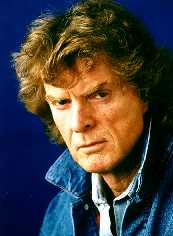