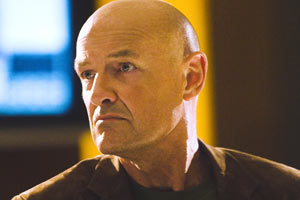 The second installment of ABC.com’s summer scifi series, “Masters of the Universe,” aired this past Saturday, and I was surprised at how much spirituality was packed into the short hour.
In “The Awakening,” a mysterious cocoon-wrapped golden creature with human-like properties is discovered in Iraq. To determine whether the humanoid–and others like it falling into major cities throughout the world–is a threat to Earth, hardened skeptic Albert Skynner (Terry O’Quinn of LOST fame) is urged out of retirement to help a young government official (Elizabeth Rohm) with sympathies and beliefs in alien life.

Ongoing research show people who get too close to the humanoid are “hypnotized” by its eyes; they fall into a catatonic state of extreme bliss and they deliver a message–in writing–that is a variation of Isaiah 4:2. It’s a message that urges the word to disarm their weapons, and a message that combine Christian, Jewish, and Muslim beliefs about peace.
The warning to disarm weapons alarms the world, particularly America. As all the major countries in the world decide to put down their weapons, America prepares to launch all their nuclear bombs. Only when the catatonic people begin speaking of a “He” who is watching and listening to humans, and who would destroy Earth if countries didn’t disarm, do all the countries wonder whether there is a God who is sending a warning.
To save the world, Skynner submits himself to being “hypnotized” by the humanoid. Waking up, he becomes a mouthpiece for the American president who speaks words that Skynner is saying himself. The president makes a shocking, impassioned speech that reveals his true prejudices against other countries, but his honesty forces everyone’s mutual suspicions into the open–and leads everyone to disarm Once this decision is made, the humanoids suddenly transform and reveal themselves to be angels–golden, bald-headed angels with light, feathery wings!

Even though the pacing and editing of the hour was slightly awkward, “The Awakening” ended up being a surprising episode of how the world awakens to their prejudices and awakens to promoting a compassionate, understanding, and peaceful relationships with each other. Angels, who were sent by God to give humans a second chance to redeem themselves, help to “awaken” the world to see there is a God who is out there taking note of our every action.
But also hidden throughout the episode is a not-so-subtle message accusing America of failure to “awaken” to the endless fighting in Iraq. At one point, there is also a direct confrontation between the American president and the Chinese president, an allusion to the Cold War, and to the ongoing suspicions between both superpowers. Although the American president is the one who reveals his honest thoughts at the end and forges a new respect and understanding between nations, he probably woudn’t have “awakened” without some divine intervention.