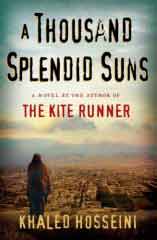 Khaled Hosseini, whose brilliant first novel, “The Kite Runner,” captured the world’s attention with its look at fathers and sons and the evolving relationship between two young boys in Afghanistan, has scored another knockout with his second novel, “A Thousand Splendid Suns.” It recently debuted as the number one book in the nation and held the top position for four straight weeks. Hosseini continues exploring the roots of his Afghani people, but this time turns his attention to the story of two women over a contentious 30-year span in Afghanistan.
In a nation that is changing politically and socially, in the midst of carnage and bloodshed, two women from completely different backgrounds develop a strong relationship that even death cannot do apart. “”Thousand Splendid Suns” is a touching, emotional tale of a friendship that grows stronger in the midst of a nation that falls apart and tries to rebuild itself.

Mariam, a “Harami,” is the illegitimate daughter of a wealthy businessman from Herat. She is forced into marriage with a much older shoemaker from Kabul. Her mother has recently committed suicide, something Mariam blames herself for. After coming to terms with her marriage, she fails to bear her heavyset husband, Rasheed, a child. The relationship between Rasheed and Mariam becomes abusive and highly matter-of- fact in the midst of a changing Afghanistan.
Then there is Laila, a neighbor’s child, whom Rasheed and Mariam have watched growing up. She loses her love, her siblings, and parents to the war and fighting. Having been brought up in an intellectual environment, she is saved by Mariam and Rasheed, whom she eventually agrees to marry for reasons that are only known to her.
These two women are thrown together in the middle of war. They suffer the oppression of their shared husband as well as the violence-filled, politically-charged environment in which they live. Though Laila and Mariam begin their relationship as co-wives with hostility, it wanes quickly and becomes an eternal companionship that goes beyond mortality.
If you were blown away by “The Kite Runner,” Hossieni’s second book will do the same. Laila and Mariam’s story is told magnificently and succinctly in simple and effortless prose by a skilled storyteller–all the while interweaving the factual history of a besieged nation in the background. Faith, war, love, and heartache all merge effortlessly in this novel.
—Visi Tilak

WWJD About Paris Hilton?
archives most recent
More from Beliefnet and our partners
previous posts