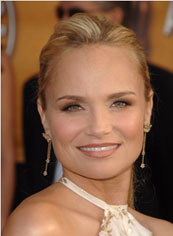 Back when Kristin Chenoweth had her own television show, she told Beliefnet that she hoped the show would “show the human face of Christianity.” Nowadays, it’s more than the face of Christianity that Chenoweth is showing. She appears nude (tastefully) in the May issue of the beauty magazine Allure, in a portfolio of actresses who bare all in the name of encouraging the magazine’s readers to be proud of their own bodies.

More than her skittishness about her belly flab (“I’m not at my ‘TV weight’ right now,” she reports), the “Wicked” star expresses nervousness about what fellow believers will think of the state of her soul. “I’m very religious,” she says. “There are going to be some people who don’t like that I did this, but I just pray to God that I’ve made the right decision.”

We’d be praying along with Chenoweth if it were the first time she’d exposed her flesh for the camera. But a little more than a year ago she posed for a gallery in FHM, a magazine for immature–uh, young men. For FHM she wore a series of well-chosen bikinis; in Allure it’s an artfully placed length of driftwood. But her publicist likely had more to do with both than the Lord. (We also wonder how inspired the average reader will be by nude photos of the likes of Chenoweth, Carla Gugino, Vanessa Williams or R&B singer Cassie, none of whom have any apparent flaws. But that’s another post …) 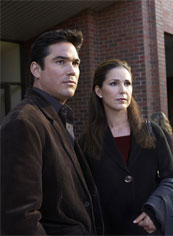 There's Justice, but No Cross in 'Crossroads'
archives most recent
More from Beliefnet and our partners
previous posts